The Museum’s collection of North American material is one of the most significant in the UK, including a series of early portraits of chiefs who visited Washington DC in 1856–7, portraits by C.M. Bell before 1884, and J. Hillers’s photographs from the US Geological Survey to the southwest in 1878. In 1996, the Museum organised the major exhibition Native American Photographs: Nineteenth-Century Images from the Collections (18 May – 28 September 1996), and more information about the Museum’s holdings is available online (view). The Museum was a major lender of original material to one of the most significant UK exhibitions of North American photography in recent years, Native Nations: Journeys in American Photography (Barbican Art Gallery, 1998). 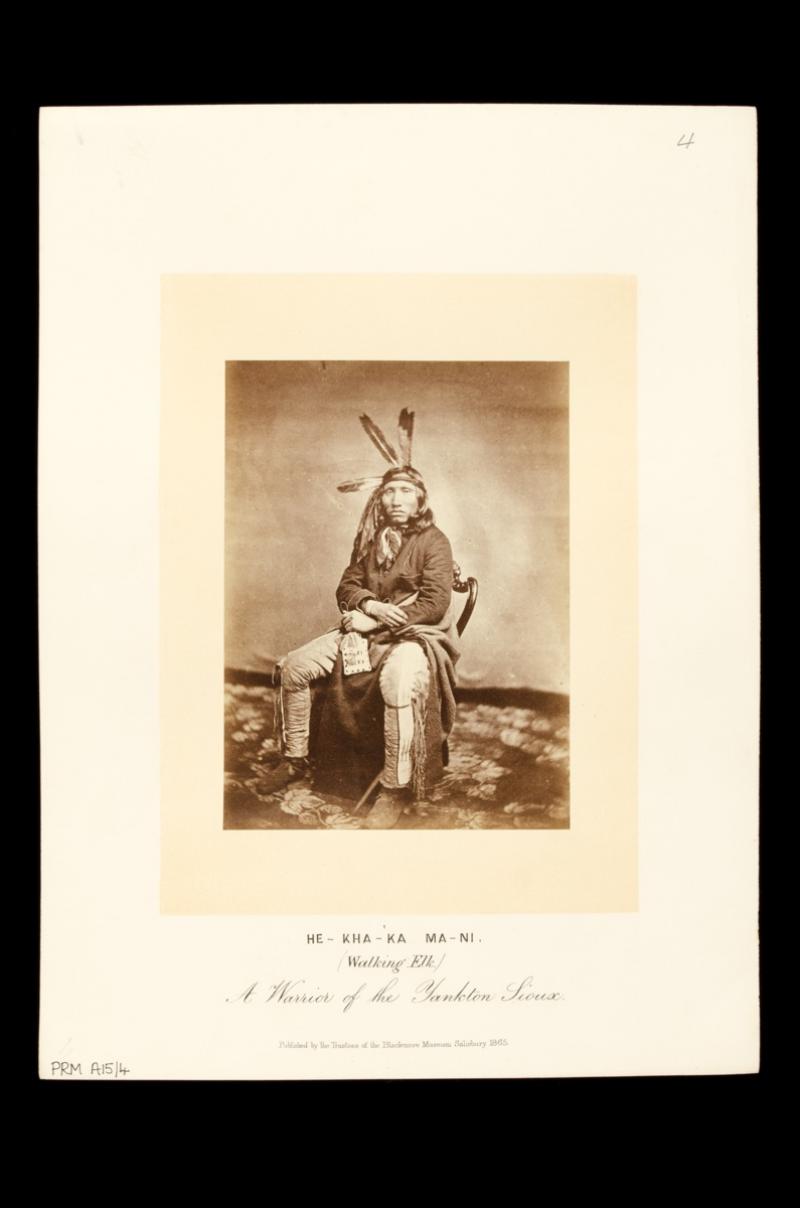 Since the earliest days of photography images have been made of Native American peoples . Although many different styles of photography developed, the vast majority of photographs were taken to serve the interests of the white American population. They reflected ideas of the Native American as perhaps a "noble red man" from a "disappearing race" in the face of settlement and modernisation, or as the "barbarous savage" of adventure stories (and later films) in need of "civilisation". Native Americans seldom had any control over these representations or their interpretation.

By the mid-nineteenth century, the date of the first photographs in the collection by McClees Studio, white settlement of America's west was pushing the Native American population from their traditional lands. This was a source of great tension which often erupted into violence. The U.S. government invited delegations of Native American leaders to Washington DC to impress them with the power of progress and to negotiate treaties over land rights peacefully. Many of these Native American visitors were recorded by leading photographers of the day. These photographs were taken in 1858 by McClees & Vannerson Studio. They are interesting because they present the Native American leaders in the same style as other important people of the day, such as President Abraham Lincoln or General Lee. They are fine portraits that let us see the individuality of the sitters, and they are captioned with their names.

"The Science of Man"

At the same time such photographs came to have other meanings. What viewers "see" in a photograph is largely dependent on the contexts in which the images are presented, combined with what the viewer already knows or believes. The second half of the 19th century saw the rapid development of anthropology or ethnology - the scientific study of peoples and cultures. Photographs like these were also seen as general representations of different tribes.Very soon after these two photographs were made, they were being offered for sale as examples of, to quote McClees' advertisement leaflet, the "race of red men, now rapidly fading away".

The organisation of scientific anthropology came under the control of a U.S. Government department, the Bureau of American Ethnology, established in 1879. Its function was to describe and record Native American peoples and cultures. This record was also available to be used by the Government in its "assimilation" policy - the attempt to absorb Native Americans into white culture and its ideas of progress and civilisation.

The whole period saw a hardening of attitudes towards Native American peoples. Their legal status changed in 1871, giving them fewer land and negotiation rights. Yet the delegations to Washington continued and the 1880s saw some of the most concentrated photographic work.

The photographs of Charles Milton Bell here are good examples of this period. Bell was taking these photographs for the Bureau of American Ethnology and its influence can be seen clearly. Although they are strong portraits on one level, they do not have the lively individuality of the McClees & Vannerson images. Despite the rich detail, such as Pretty Eagle's abalone shell pendants, porcupine quill embroidery and hair dressed with buffalo grease (illustrated above left), there is a severe, still, almost lifeless quality to the photographs, especially when one looks at a number of them together.While Pretty Eagle's features and clothing appealed both to scientific and popular ideas of "real" Native Americans, other photographs, like that of Mi-waka Yuha photographed by Hillers, have details such as European clothing, medals, or short hair, which suggest the rapid changes overtaking Native American peoples.

Photography in the Field

Making a photographic record of Native American culture first hand in the "field" was another major concern. The examples in the collection of Hopi people were taken in 1879 on the U.S. Geological Survey of the Southwest. The photographer was Jack Hillers, who had worked on a number of the Survey expeditions. The intention of these photographs, like Bell's, was to document cultures which were believed to be rapidly changing or even dying out in the face of white settlement, technological change and central government policy towards Native American people. Thus we see groups posed carefully to show traditional pottery making, or clothing or domestic scenes such as dressing hair. All the photographs were described in detail for anthropologists who might use the images. For instance, the original 1885 caption for one of them is "A group of [Hopi] girls, showing their characteristic head-dress and apparel. The hair is worn in this way so long as they remain unmarried, after which it is worn down."

However, Hillers' photographs, like all the photographs, are much more than simple documents. Although the realism of photography suggests that "this is how it was" it should be remembered that it was the photographers who decided how to photograph whatever they thought was interesting about their subjects. So it is their vision of the subject that survives for us to use as an historical source. Hillers' photographs are a good example. Although photographing "real" people, doing "real things", there is a strong artistic element in the photographs' composition which suggests a more romantic Western way of thinking about the subjects. This can be seen in the careful positioning of the figures within the frame of the photograph, similar to portrait painting, or in the sweeping skies and wide landscapes which suggest nineteenth century European ideas about wilderness and purity of spirit. So we see that these photographs are more complicated than simply a record of activities and clothing.

In recent years Native American peoples have been using photographs such as these to re-engage with their history on their own terms within their communities. The Smithsonian Institution in Washington, which houses many of the anthropological archives, has for many years run an outreach programme for native American communities and provided training for Native American historians and curators. This has raised many issues which challenge conventional Western ideas of "historical truth".

Working with similar ideas a number of Native American artists such as Carm Little Turtle, Jimmy Durham and Hulleah Tsinhnajinnie have used historical photographs of Native peoples in their contemporary art work. Through this work they have drawn attention to many of the complex issues of modern Native identity, such as ownership of the land and legal rights, as part of the growing political voice of Native American peoples in the late twentieth century.

Photographs, and what we believe they show us, are part of these complex issues.