The Everyday Photography of Jacques Touselle

When electricity reached the Cameroonian town of Mbouda in 1970, Jacques Touselle opened its first photographic studio – ‘Studio Photo Jacques’ – which prospered into the mid-1980s. The thirty-nine images selected for this exhibition resonate with the shifting identities and aspirations of people living in a rapidly urbanising market town in the 1970s and 1980s. Although the sitters remain anonymous, the portraits still suggest the stories, life-events and relationships that brought these people into the studio to be photographed. In addition to the obligatory identity card portraits, local people would come to have group pictures taken with family and friends, as well as to commemorate feast days, weddings and other significant personal occasions; as Jacques himself says, ‘everyone wanted a reminder of these things’.

Although portraits are in one sense ‘about’ the people portrayed, they are, as Dorothea Lange noted, also self-portraits of the photographer himself. This view of authorship, however, is not one with which Touselle necessarily agrees, claiming that his own role was relatively passive, with subjects free to choose their own poses and styles of presentation, which were often inspired by imported French magazines or other studio shots. Aiding the process was a small selection of props, including an ornamental iron grille, a patterned chair and an artificial Christmas tree, while for studio backdrops Touselle hired a local artist to create lively painted designs, which he would update every few years as fashions changed; and fabric curtains in various colours were also installed to facilitate more formal identity and portrait photographs.

Many of the photographs in this exhibition would have been heavily cropped by Touselle when producing prints for clients, especially those taken for marriage certificates and identity cards. The government had introduced National Identity Cards in 1957, and this kind of work comprised a large part of Touselle’s everyday photography until 1996 when the Bureau of Police took control of identity card portraiture. The success of Touselle’s business was closely linked to local conditions. With the growth of Mbouda in recent years and greater competition from a younger generation of photographers, few clients nowadays make their way to the premises of Studio Photo Jacques. Now, when customers do come, the photographer is more likely to suggest a portrait taken outside on the street, with the backdrop of a real tree rather than the faded, painted one inside.

Jacques Touselle was born around 1935 in Babadjou, a small village near Mbouda in the Western Highlands of Cameroon. He began taking photographs at around the age of twenty-five with a Photax camera, graduating to a Semflex in 1963, and later buying a Congo lens camera for much of his identity card work. In the days before electricity, Jacques would carve a small hole in the wall to expose his negatives onto photographic paper, a method that allowed him to print as large as 30 x 40 cm. Later, during the heyday of Studio Photo Jacques, he regularly shot up to fifteen rolls of film in a day, as people queued to have their portraits taken.

Portrait of two friends holding a cassette player and a handbag, possibly commemorating their purchase of these valued consumer goods. Photograph by Jacques Touselle. Mbouda, Cameroon. About 1975. (Copyright Jacques Touselle)

The photographer outside his studio in Mbouda, Cameroon. March 2007. (Copyright Katie McKeown) 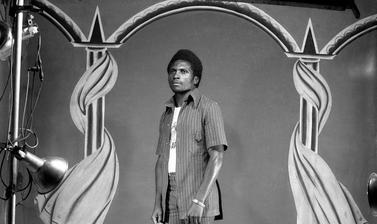 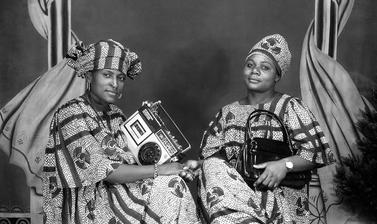 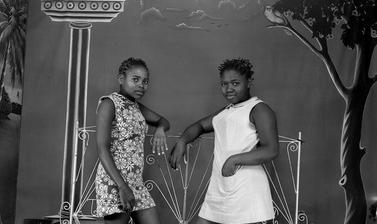 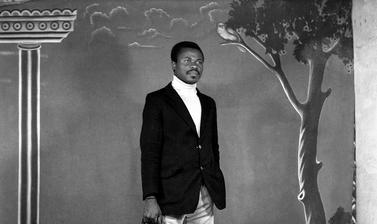 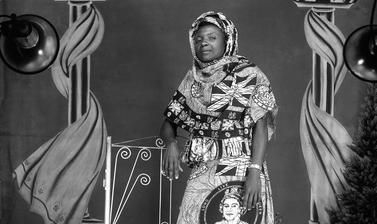 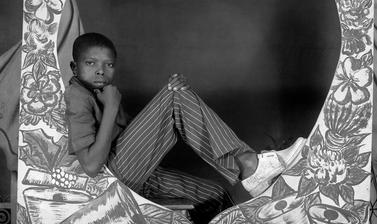 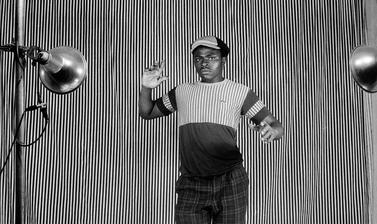 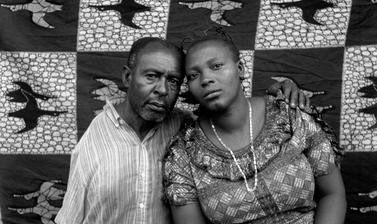 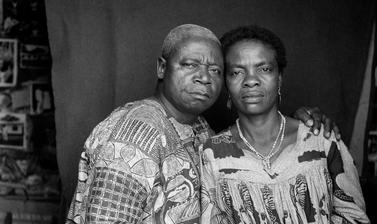 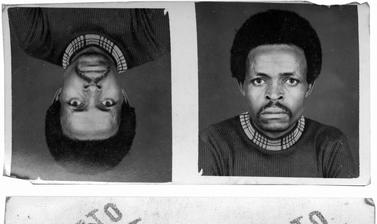 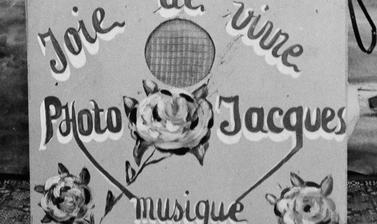 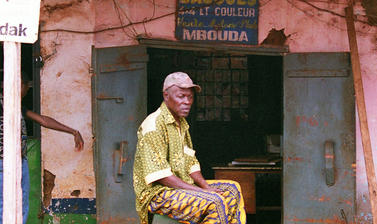