In each community, local people were asked to direct me to a location where they could identify problems with the water. The water body was then highlighted by pouring strong red food colouring into it, sometimes by the people themselves, or sometimes by me being directed with hand gestures.

The participants in the project were First Nations political leaders and environmentalists. All of these people had strong feelings about water contamination, but not all of them were prepared to give their names. These are politically charged issues at the provincial, national and international levels, but they are also sensitive issues on First Nations reserves.

First Nation stewards of the land are witness to rapid environmental change that is affecting the lakes, rivers and creeks. They feel charged with the authority to note these changes, and to speak in defence of the land.

As a First Nations person, I have the obligation to represent my family and my people well. As an Albertan, I believe we can be more informed about these environmental issues by asking and listening to First Nations witnesses. As an artist, I have the opportunity to give awareness to some of these pressing issues.

Being a Carry-the-Kettle band member from Saskatchewan and an Albertan living in Lethbridge, my artistic engagement comes with responsibilities that might not be apparent to those who are uninformed about First Nations protocols.

Reservations were assigned through the treaty process and they are the places of sovereign nations. I can’t just walk in and take pictures. My engagement will always be from one nation to another. Many Indian people know my reserve and more often than you might think, they know a member of my family.

As an Indian, I have the obligation to represent my family and my people well. As an Albertan, I see my province being contaminated. I believe Albertans have the opportunity to be more informed about these environmental issues by asking and listening to First Nations witnesses about their perspectives. As an artist, I have the fortunate opportunity to create a place for engagement, discussion and to give awareness to some of these most pressing issues. 'Scarred/Sacred Water' is a series of artwork that belongs to everyone. – Tanya Harnett, Carry the Kettle First Nation, Saskatchewan, Canada

'The images appear harmless enough initially, until you recognise the wounding. In Harnett’s hands, a peaking wave becomes an open sore, a beach becomes a toxic leak, and a road ends in hemorrhage. Her signs on the land are visceral and epic, like arriving at some battleground after the siege … there is a plea in Harnett’s series to simply regard the world as a body, which can suffer the same issues as any person might physically.' – Derek Michael Besant 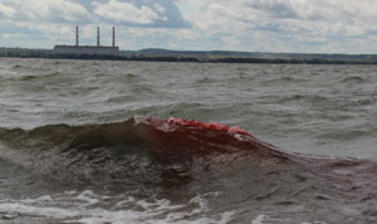 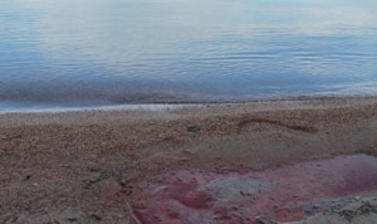