This event is now fully booked. There will be an online recording available 24 hours after the event at https://www.prm.ox.ac.uk/radical-hope 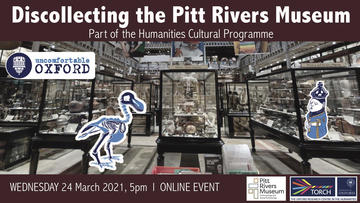 Join Uncomfortable Oxford for an interactive virtual tour of the Pitt Rivers Museum, focusing on different modes of (dis)collecting, display and critical analysis of the museum space.

Uncomfortable Oxford is an academic-led social enterprise in the city of Oxford, which runs lectures, digital events and creates resources highlighting stories of inequality, imperialism, race, class and gender discrimination, as well as the debates surrounding historical memory. Founded in 2018, the organisation's goal is to raise awareness and generate uncomfortable, yet meaningful, discussions about these issues in the public sphere, using the built environment in particular, to bring up contested histories and their present legacies.