Among the objects in the Arctic clothing display in the Museum's court are three beautiful examples of seal intestine clothing: two parkas and a cape. Intestine was used widely in the Arctic because of its water-repellent properties and inherent strength. The parka and hooded jacket would be worn over everyday clothes, while the cape was for ceremonial wear. The two larger garments, one from the Aleutian Islands and the other from the North Baffin Islands, were both originally highly decorated with dyed red and black seal gullet borders, caribou hair stitching and dyed wool. 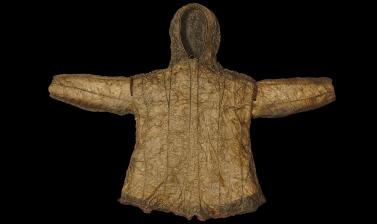 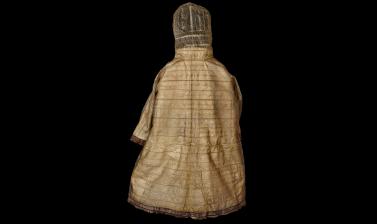 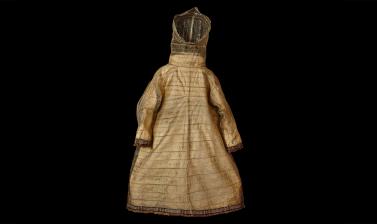 Unfortunately past treatments and repairs, insect damage, poor storage and display techniques had caused the garments to become fragile and vulnerable.

When removed from the display case, the garments were first frozen at -30°C for one week, a precaution against any live insect activity, before an assessment of each of the garments was carried out. All three were dirty, brittle and misshapen. Old insect activity had created numerous small holes in the body and borders of the cape. Due to a poor display method, the cape had become misshapen and torn. In addition to this, the parka had a disfiguring repair across the back.

Following initial cleaning with a gentle vacuum, the garments were cleaned with cotton wool swabs moistened with distilled water. This, along with humidification in a polythene champber, increased the flexibility of the intestine and allowed the garments to be manipulated into their original shapes.

As the garments had been displayed flat against the back of the display case, this small intervention hugely improved the look of the garments, bringing their original size to life.

The previous repairs to the back of the parka were removed. Once all three garments had been cleaned and reshaped, the task of mending the holes and tears began.

Conservators aim to stabilise damage with compatible mateirals; however, it is important that modern conservation repairs are distinguishable from the original object and any original repairs that may be present. Treatment records have been kept since the 1970s. In recent years we have been transferring old records onto our digital database making information about past treatments reasily available. Our aim is not to restore objects to their original state but to stabilise them for future generations.

Instead of using sea mammal intestine, we visited the local organic butcher and bought some pig intenstine, which is commonly used for sausage casings. In a very similar manner to the method of preparing seal intestine, but on a much smaller scale, the pig intestine was cleaned, inflated and dried. Once dried, the intestine was cut to size and applied to the holes using a cellulose-based adhesive.

One of the aims of the project was to display the cape and parka to illustrate their full size, as they would have been when worn. New soft mounts of chemically inert materials were required to fully support the garments without causing any damage. As the garments are made of organic materials, the internal supports were designed to be easily removeable from display to monitor for any potential insect activity.

A wall-mounted bracket, along with soft internal support, allowed the cape to be suspended high up in the display, taking full advantage of the display case size. The parka was mounted on a free-standing soft support on the base of the case. Due to the straight-sleeved design of the hooded jacket, it was mounted on a paddle pole passed through the sleeves with the ends suspended from the ceiling.