The Beyond the Binary exhibition brings together the diverse perspectives of LGBTQ+ researchers, artists and community activists to create space for self-representation in the museum. On this QR page, community curator Gemma Cantlow explores the history of Stanhope Peeps and their relationship to gender.

Amulet with a Stanhope Peep lens (France, Europe)
Popular in the 1800 – 1900s, Stanhope Peeps were small novelty charms (in forms such as pens, knives, rings) containing a microphotograph which could be seen when held up to the light. Often featuring images of tourist or religious destinations, the pipe in the Beyond the Binary exhibition contains a picture of a church at Longpont-sur-Orge, France. This miniature smoking pipe from France was a novelty item popular with travellers.

1985.52.756 Amulet with a silver pendant in the shape of a pipe with a Stanhope Peep lens in the pipe bowl, with a loop for suspension. The 'Stanhope Peep' is a lens through which a miniature image and text relating to the 'Pilgrimage to Longpont' can be seen. Along the top the text reads: 'SOUVENIR DE LONGPONT' (France, Europe). 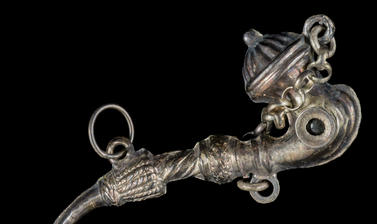