This exhibition presents a selection of photographs showing Marshal Josip Broz Tito taken during official visits to various African countries in the post-war period. The Yugoslav leader visited the continent regularly from the 1950s to further diplomatic relations and establish bilateral trade deals, and to foster support for Yugoslavia’s regime during a time of political entrenchment in Europe but considerable change in Africa. Recording a perspective on the Cold War little known or acknowledged in the West, the photographs highlight Tito’s meetings with African leaders and his interaction with the people and cultures of these countries, as well as showing moments of leisure, especially during major tours of 1961 and 1970. The exhibition is a collaboration between the Pitt Rivers Museum and the Museum of Yugoslavia, Belgrade, and is an outcome of the AHRC-funded research project ‘Socialism Goes Global: Cold War Connections Between the “Second” and “Third Worlds”, 1945–1991’ (University of Exeter). A new book of the same title, Tito in Africa: Picturing Solidarity, edited by Radina Vučetić and Paul Betts, is published to coincide with the exhibition.

‘The exhibition Tito in Africa: Picturing Solidarity documents Marshal Josip Broz Tito’s state tours of Africa from the mid-1950s to the late 1970s. Tito aimed to win African support for Yugoslavia’s Non-Aligned Movement in the name of anti-colonialism and socialist solidarity, and several well-known Yugoslav photographers recorded Tito’s well-publicised visits to socialist-leaning African countries, ranging from Algeria to Zambia. Yet these were not stiff propaganda photos of conventional international diplomacy, but rather were rich and revealing moments of first-time cultural encounters between leading figures of the so-called Second and Third Worlds. The images show the Yugoslav head of state and his wife engaging with the leaders and cultures of these host countries in informal and quite unusual ways, recording special moments of interest during those visits: touring archaeological sites, factories and places of historic significance, safari hunting, observing dance and music performances, meeting labourers in their workplaces, and greeting children in traditional costume. As such they offer an alternative picture of Cold War cultural relations between developing nations from different continents and traditions.’ — Prof Paul Betts (University of Oxford)

‘The narrative of the exhibition Tito in Africa: Picturing Solidarity is based on a changing relation between two main components: one comprising the social values of solidarity and anti-colonialism and the other the formal representations of international meetings at the highest level. The values of solidarity and anti-colonialism were held in common by the Third World countries with which Yugoslavia had shared beliefs and goals in the 1960s and the 1970s. These values dominated the official discourse, memoranda, reports, and other documents of that time. Visual representations of this rhetoric, however, are more complex. Photo and film footage of heads of state meetings reflect strict rules and norms of world diplomacy, inherited from previous – colonial – systems of representation. The legacy of anti-colonialism – a conceptual framework that transcends the actual ending of colonial regimes – is not readily evident on the international level. Despite the strong presence at the time of bilateral relations between socialist Yugoslavia and African countries, modern-day post-Yugoslav spaces betray a conspicuous lack of awareness and knowledge of anti-colonialism. More worrying, however, is the lack of knowledge about colonialism, as its legacy continues to be perpetuated through cultural and educational representations. Without claiming to present the totality of international contacts of Yugoslavia and African countries – or to make definitive assessment regarding the meaning of their cultural, economic or political co-operation – the curators of this exhibition endeavour to integrate these mentioned narrative components. By juxtaposing them – all the while acutely aware that neither the photographs nor their selection are neutral, and that there may be many, even opposing, interpretations – the curators wish to underline the significance of the context in interpreting an “image”.’ — Dr Ana Sladojević and Mirjana Slavković (Museum of Yugoslavia)

Ethiopia, 1955. Josip Broz Tito and Emperor Haile Selassie at the site of the historical Battle of Adwa. (Copyright Museum of Yugoslavia, Belgrade)

Ethiopia, 1955. Josip Broz Tito at the site of the historical Battle of Maychew. (Copyright Museum of Yugoslavia, Belgrade)

Mali, 1961. The official welcome for President Tito at the Bamako airport. (Copyright Museum of Yugoslavia, Belgrade)

Ghana, 1961. The parade of social organizations in Accra, held in honour of President Tito. (Copyright Museum of Yugoslavia, Belgrade)

Guinea, 1961. From the parade of military, youth and pioneers held in honour of President Tito in Kindia Region. (Copyright Museum of Yugoslavia, Belgrade)

Tunisia, 1961. Presidents Tito and Bourguiba on the way from the harbour to the residence in Tunisia. (Copyright Museum of Yugoslavia, Belgrade)

Egypt, 1962. Josip Broz Tito with his wife Jovanka on a ship in front of the temple in Abu Simbel. (Copyright Museum of Yugoslavia, Belgrade)

Zambia, 1970. Presidents Tito and Kaunda at the rally in the workers’ village at the building site of Kafue Gorge Hydroelectric Power Plant. (Copyright Museum of Yugoslavia, Belgrade) 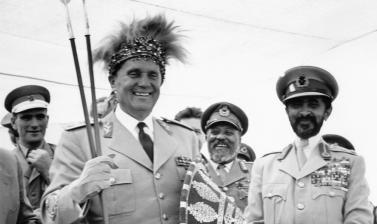 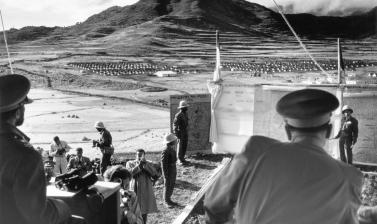 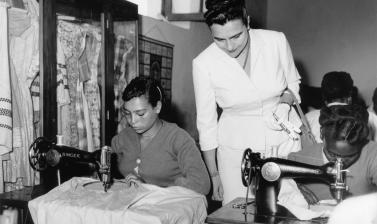 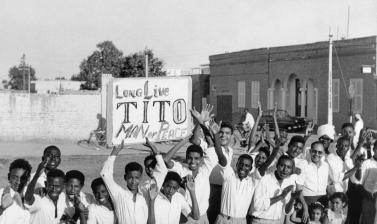 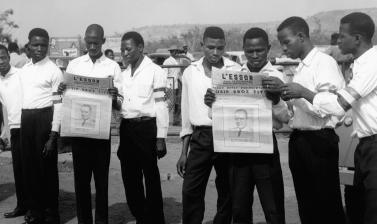 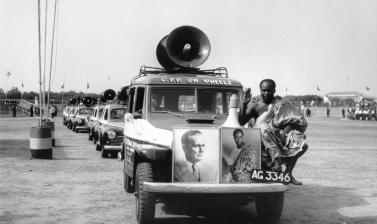 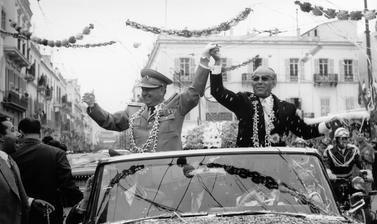 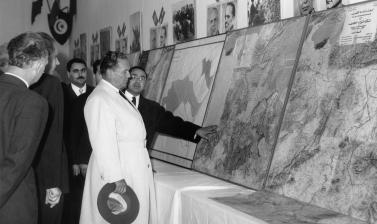 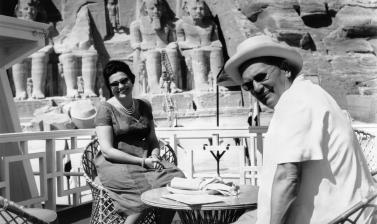 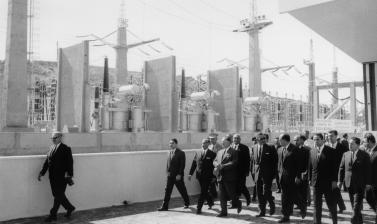 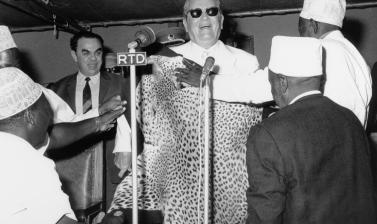 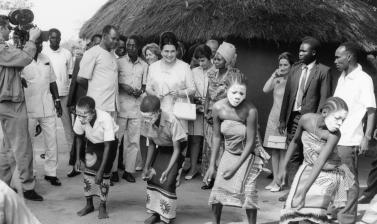 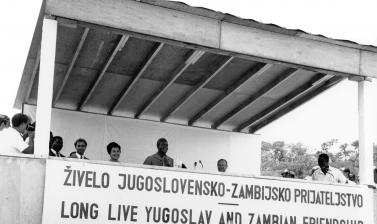 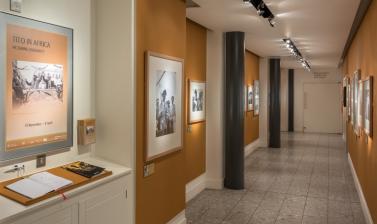 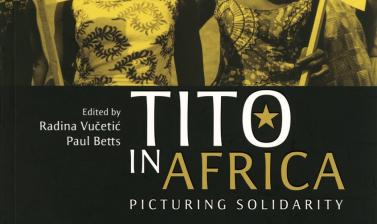 The exhibition is a public outcome of the major international research project ‘Socialism Goes Global’ based at the University of Exter, funded by the Arts and Hunamities Research Council. It draws on the collections of the Museum of Yugoslavia, Belgrade which holds photographs produced by the Cabinet of the President of the Republic between 1947 and 1980.

The Pitt Rivers Museum’s exhibition Tito in Africa: Picturing Solidarity is a smaller, touring version of the original exhibition, Tito u Africi – Slike solidarnosti, held at the Museum of Yugoslavia, Belgrade, from 27 June to 29 October 2017. The prints, made by the Museum of Yugoslavia from the original negatives, will subsequently travel to the Wende Museum in Culver City, California, USA, in 2019.

‘Traces’, by Dušan Šaponja and Dušan Čavić (2017) from Pitt Rivers Museum on Vimeo.

You can listen to ‘Marxism, “Red” Globalisation’, from BBC's Thinking Allowed, (originally broadcast on BBC Radio 4 on 13 November 2017), which features historian James Mark discussing some of the central themes encountered in the Pitt Rivers Museum's exhibition, online at BBC Radio 4.

Tito in Africa: Picturing Solidarity (2017), by Radina Vučetić and Paul Betts (eds.), has been published by the Museum of Yugoslavia to accompany the exhibition.