The Last Samurai: Jacques-Philippe Potteau’s Photographs of the Japanese Missions to Europe, 1862 and 1864

Jacques-Philippe Potteau’s Photographs of the Japanese Missions to Europe, 1862 and 1864

This case display presents fourteen mounted albumen prints and two related engravings from the important Takenouchi mission to Europe (1862) and the Ikeda mission to France (1864). Sent by the Tokugawa Shogunate to renegotiate the terms of earlier trade agreements, the thirty-strong ambassadorial delegations visited numerous European cities during voyages lasting between six and twelve months abroad. Prompted in part by concern for Japan’s silk industry, while also seeking to limit the extent of foreign influence in the country, the Takenouchi mission – which travelled principally to Paris, London, The Hague, Berlin, St Petersburg and Lisbon – negotiated the closure of the ‘two ports and two cities’ (Hyōgo and Niigata, Edo and Osaka) for longer than had previously been agreed under the so-called ‘unequal treaties’ of the 1850s. The 1864 Ikeda mission was shorter and less successful than its predecessor, failing to secure the desired treaty revisions which were its goal, but nonetheless both visits excited considerable interest and were widely reported in the printed press of the day.

The photographs exhibited here, which were taken in Paris by Jacques-Philippe Potteau (1807–1876), show individual members of the two missions – the envoys, officers, interpreters, even a hairdresser – who were also among the last generation of samurai before their abolition following the Meiji Restoration (1868) only a few years later. Potteau, who was an assistant at the Muséum d’Histoire Naturelle, had been trained in scientific techniques and methodology, but his photographs were not a paid commission and appear to have been taken of his own accord. Working from a studio beside the Jardin des Plantes, he photographed a wide range of passing visitors, his pictures here recording the occasions of Japan’s earliest diplomatic encounters on European soil. Typically interpreted as model examples of nineteenth-century anthropological photography, this exhibition for the first time places Potteau’s Japanese portraits within the wider political and historical context of the late Edo period, highlighting their significance during a decade of extraordinary change. The prints, a selection from a larger set of work, were donated to the Pitt Rivers Museum by Herbert Coghlan of the Newbury Museum in 1951.

Displayed alongside Potteau’s photographs, and also from the Pitt Rivers Museum’s collections, are two contemporary woodblock prints by Toyohara Kunichika and Utagawa Kunisada (also known as Utagawa Toyokuni III); a katana and two wakizashi, examples of the finely crafted blades worn by samurai as signifiers of their rank or status; and reproductions of four hand-coloured albumen prints sold by the Adolfo Farsari studio in Yokohama. Farsari’s photographs, which were taken around 1886, in the port city at the centre of a growing tourist trade, can be seen as an indication of the changes which had occurred since the Bakufu missions two decades earlier, being produced as Japan was opening rapidly to the West and as the West was beginning its long and ongoing fascination with Japan.

Portrait of Yukichi Fuzuzawa (1835–1901), officer on the 1862 Japanese mission to Europe, employed as an interpreter of Dutch and English. Fukuzawa’s experience on the Takenouchi mission led to him becoming a firm advocate of greater engagement with the West, and his memoir Seiyō jijō [Things Western] (1866) was one of the most influential books of the period. The founder of Tokyo’s Keio University, Fukuzawa’s importance as an educator is still widely acknowledged in Japan, and today he features on the coun

Members of the Takenouchi mission to Europe (1862), pictured wearing traditional dress and each carrying a daishō or pair of swords (katana and wakizashi). This engraving, published in Le Monde illustré, was based on photographs taken in the Paris studio of the French photographer Nadar, whose plate camera can be seen depicted in the background. Ichikawa Wataru, in his diary of the mission, which was translated by Ernest Satow, described the envoys visiting the ‘house of a shadow-copier’, clearly referring

Members of the Ikeda mission to France (1864), which ultimately failed in its objective to postpone the opening of the trading port of Yokohama to the western treaty powers. This engraving, published in the illustrated press of the day, was based on two photographs taken in the Paris studio of celebrated photographer Nadar (Gaspard-Félix Tournachon). Engraving by E. Roevens (after photographs by Gaspard-Félix Tournachon, known by his pseudonym as Nadar). Paris, France. 1864.

Portrait of Nagaaki Ikeda (Chōhatsu) (1837–1879), also known as Ikeda Chikugo no kami, chief envoy of the 1864 Japanese mission to France. Ikeda, who was appointed to represent the Tokugawa government at the age of twenty-six, was deemed to have failed when the mission returned home early, and he was dismissed from service. Later reinstated, his career was cut short by ill health and a premature death, though he was posthumously accorded the highest honours of the state. Photograph by Jacques-Philippe Potte

Portrait of Taichi Tanabe (1831–1915), officer and secretary on the Ikeda mission to France. An advocate of Japan opening to the West, Tanabe attended the Universal Exposition in Paris in 1867 and later travelled through America and Europe with the Iwakura delegation. This experience at the forefront of Japan’s international relations led him to author Bakumatsu gaikō-dan [Talks on Late Tokugawa Diplomacy] published in 1898. Photograph by Jacques-Philippe Potteau. Paris, France. 1864.

Profile portrait of Taichi Tanabe. This image reveals the photographer’s training as an assistant at the Muséum d’Histoire Naturelle in Paris, posing his subjects in the ethnographic or ‘scientific’ style of the day. Potteau’s photographs were considered to be particularly good examples of this genre, and prints were given to several official French expeditions ‘to serve as an example of appropriate posing and format’. His portraits of the Japanese representatives were not a commission

Portrait of a man dressed as a samurai and carrying a daishō or pair of long and short swords (katana and wakizashi). Photograph by the Adolfo Farsari studio (‘A. Farsari & Co.’). Yokohama, Japan. Circa late 1880s. (Copyright Pitt Rivers Museum, University of Oxford. Accession Number: 1998.99.37)

Studio portrait of actors wearing the traditional armour of the samurai, captioned (in English) as illustrating a ‘general and staff’. Photograph by the Adolfo Farsari studio (‘A. Farsari & Co.’). Yokohama, Japan. Circa late 1880s. (Copyright Pitt Rivers Museum, University of Oxford. Accession Number: 1998.99.8)

Studio portrait of a man dressed as a daimyō, one of the great landowning lords of feudal Japan and a vassal of the Shogun. Photograph by the Adolfo Farsari studio (‘A. Farsari & Co.’). Yokohama, Japan. Circa late 1880s. (Copyright Pitt Rivers Museum, University of Oxford. Accession Number: 1998.99.31)

Wakizashi, or Japanese short sword, typically carried by samurai as one of a pair of blades (daishō). This sword was part of Lieutenant-General Pitt Rivers’ founding collection, originally displayed in Bethnal Green Museum and transferred from South Kensington Museum to Oxford in 1884. (Copyright Pitt Rivers Museum, University of Oxford. Accession Number: 1884.24.61)

This katana, or long sword, nearly a metre in length, has at some point in its history been shortened (by removing part of the tang, including some of the signature). Certain features of the blade, however, suggest that it was made by a (lesser) smith of the Shimosoka, probably in the early seventeenth century when this school of craftsmen received the patronage of the Tokugawa Shoguns. The sword’s handle is made of wood covered with ray skin and bound with silk thread laced over metal ornaments, or menuki, 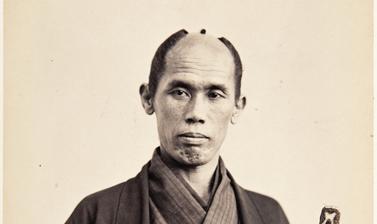 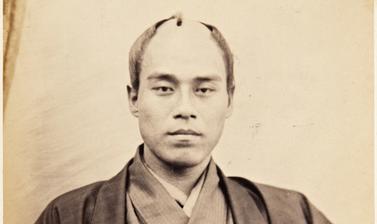 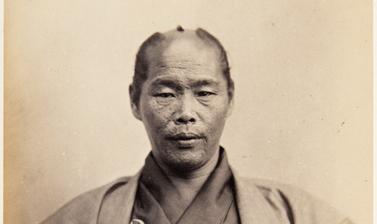 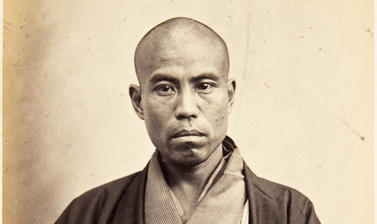 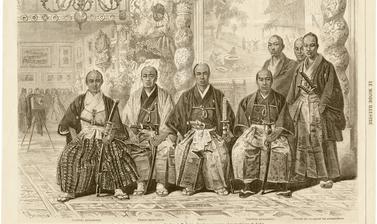 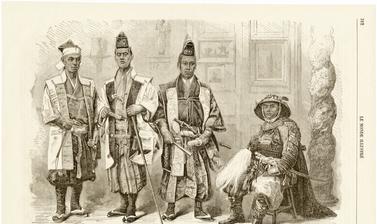 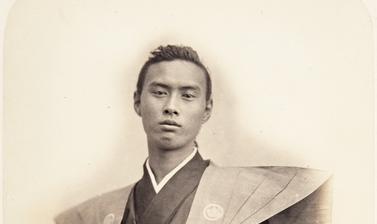 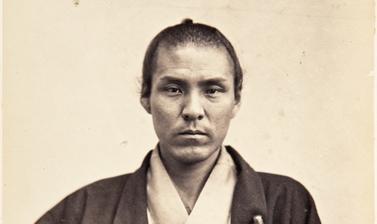 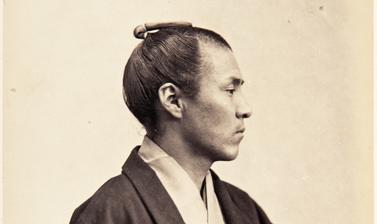 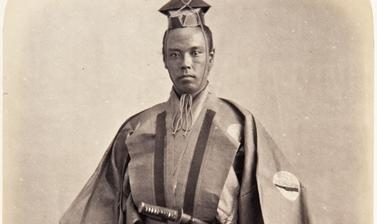 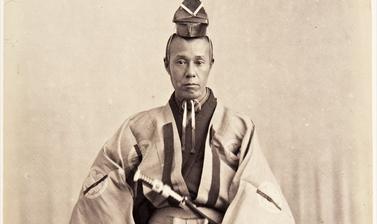 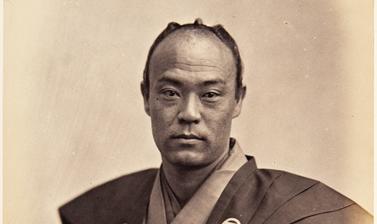 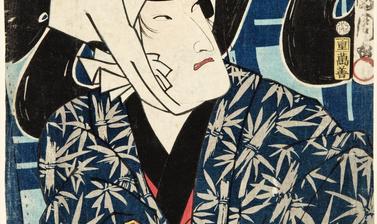 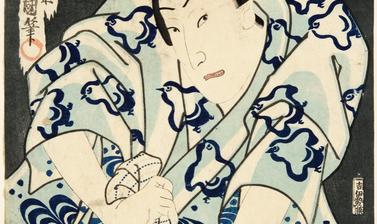 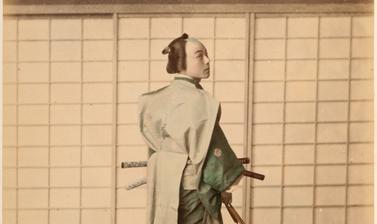 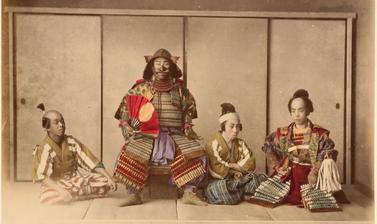 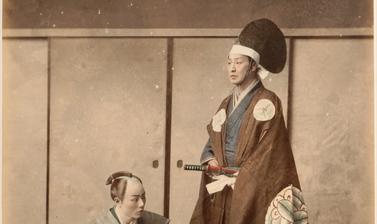 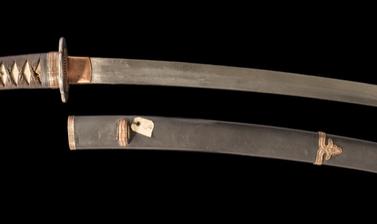 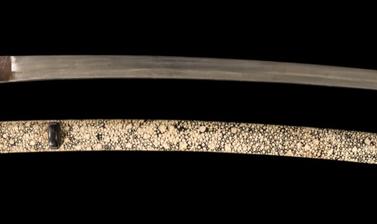 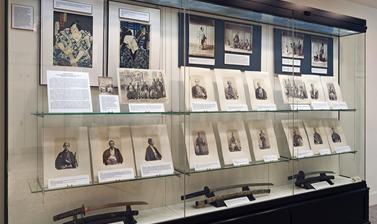