The Burial of Emperor Haile Selassie: Photographs by Peter Marlow

The Burial of Emperor Haile Selassie

When Emperor Haile Selassie was finally buried in Addis Ababa in 2000, twenty-five years after his death, only a few European journalists were there to witness it. Renowned Magnum photographer Peter Marlow was among them.

The twenty-one photographs in this exhibition document a remarkable event in recent Ethiopian history, one that provoked fresh debate about both Haile Selassie and Ethiopia’s troubled political history. The photographs shown here explore the tensions between royal, state and religious hierarchies surrounding the ceremony, as well as more personal expressions of loyalty by some of the participants.

Haile Selassie was crowned Emperor of Abyssinia in 1930, but shortly afterwards fled into exile when Mussolini invaded the country in 1935. Despite his appeal to the League of Nations for intervention, the European powers wished to avoid conflict with Italy. Haile Selassie returned triumphantly in 1941 after a military campaign ousted the Italian forces, and the country was renamed Ethiopia.

In 1974 a Soviet-backed military junta (the ‘Derg’) deposed Haile Selassie as Emperor, and he was kept under house arrest at the Imperial Palace. He died a year later while still under arrest. In 1992 his remains were discovered, buried under a toilet in the Palace, and transferred to the church of Ba’ata Mariam Geta.

Despite Haile Selassie’s undeniable historical importance, when the reburial of his remains was finally agreed in 2000, the Ethiopian government refused to give the occasion the status of a state burial, having recently accused the former Emperor of oppression and brutality during his 45-year rule. Local interest was also more muted than the organisers had hoped.

The ceremonies began at Ba’ata Church, where Selassie’s predecessor Emperor Menelik II is buried. From there, the vehicle carrying the coffin, draped in the Ethiopian flag and guarded by four warriors, moved to Addis Ababa’s Meskel Square. The procession then continued on to St George’s Church for further obsequies, since it was there that Haile Selassie had been crowned Emperor amid similar ceremony, in 1930. The final destination was Holy Trinity Cathedral, built by Haile Selassie himself, where his remains were interred with those of his wife, Empress Menen Asfaw.

Early in his career, Peter Marlow worked for the French photo agency Sygma, where he was considered one of the most enterprising and successful of Britain’s young new photographers. Assignments in Lebanon and Northern Ireland in the 1970s brought Marlow wide distinction as an international photojournalist, and in 1981 he joined the Magnum photo agency. In 1991 he was given an open assignment by the French government Department of the Somme to make a body of photographs in Amiens. For this project he began to work in medium format, which proved to be a critical turning point in his work.

As one writer has noted, ‘Peter Marlow’s eye has been defined in relation to photojournalism, but he is not a photojournalist.’ Marlow’s work has long been marked by an interest in the stuff of his surroundings – a fascination with peripheral details and events that gain a new significance through his lens. Marlow’s record of the burial of Emperor Haile Selassie bears his unmistakable mark as a photographer: an attention to detail, and to those visual dramas and juxtapositions played out at the fringes of the main event. A selection of the photographs was published in The Sunday Times Magazine in December 2000 alongside text by the journalist A. A. Gill, but this is the first public exhibition of the work.

A veteran forms part of the guard of honour for the Emperor’s coffin on its way to Trinity Cathedral. Addis Ababa, Ethiopia. Photograph by Peter Marlow. 2000. (Copyright Peter Marlow/Magnum Photos)

The Lion of Judah monument in Addis Ababa. Erected in 1930 just before Haile Selassie’s coronation, it was looted by the Italian occupiers in 1935 and taken to Rome, only to be returned in the 1960s, when Haile Selassie reinstalled it with due ceremony. Seen as a monarchist symbol by the Derg, Ethiopian veterans successfully lobbied for it to remain, as a patriotic symbol. Addis Ababa, Ethiopia. Photograph by Peter Marlow. 2000. (Copyright Peter Marlow/Magnum Photos)

Items for sale in an Addis Ababa shop, including one featuring the image of Haile Selassie with his military decorations. Addis Ababa, Ethiopia. Photograph by Peter Marlow. 2000. (Copyright Peter Marlow/Magnum Photos) 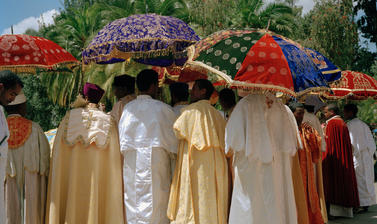 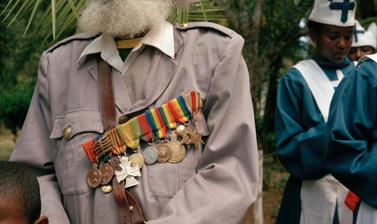 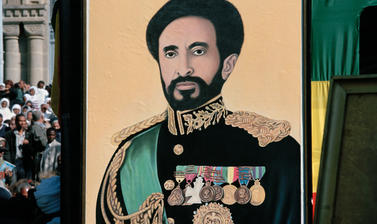 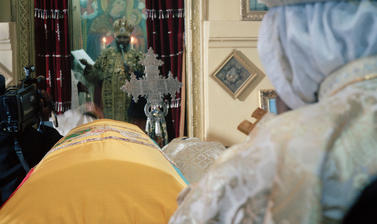 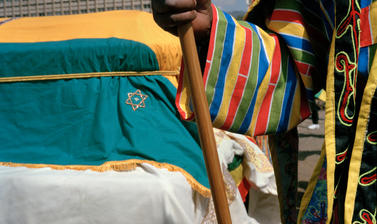 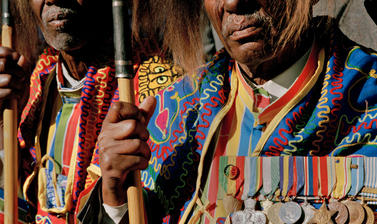 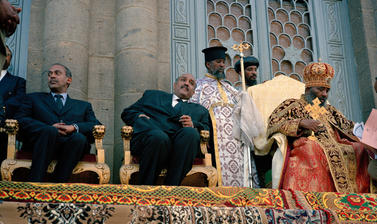 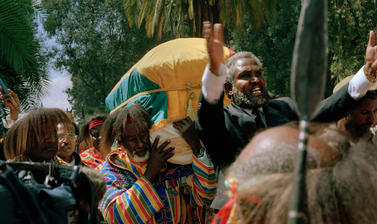 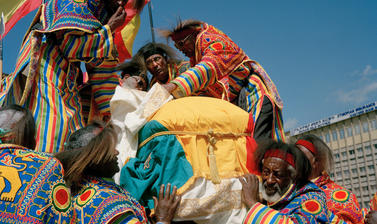 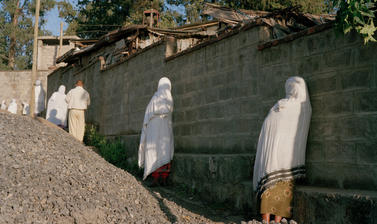 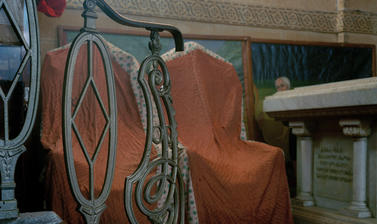 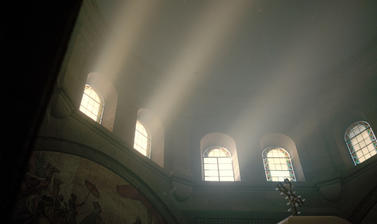 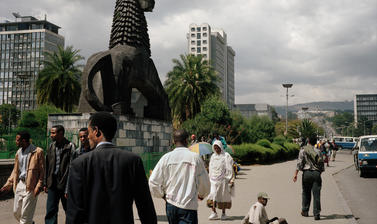 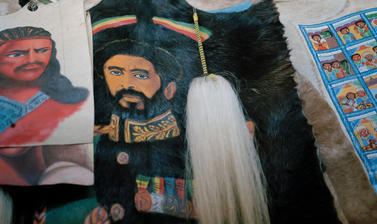 You can listen to an interview with renowned Magnum photographer Peter Marlow talking about his work shown in the Pitt Rivers Museum’s exhibition online here (SoundCloud/PittRiversound) or above.