Stitch of a Symbol

Insights into the Textile Journeys of Sheila Paine

Born in 1929, Sheila Paine has been fascinated by embroidery since childhood and in the 1960s she studied embroidery at Hammersmith College of Art. After being widowed in her early forties and bringing up four children, she decided to dedicate the rest of her life to researching embroidery. She travelled extensively, recording and photographing embroidery techniques and their cultural contexts – seeing embroidery as the overlay of cultural significance onto the everyday necessity of cloth. At the same time she collected examples for further study. Today, these embroideries are held in a number of collections, including those of the Pitt Rivers Museum.

Fascinated by a heavily embroidered dress she saw in a London textile dealer’s shop in the late 1980s, she felt compelled to find out more. The dress was covered with embroidered solar patterns, old coins, broken zips, an intriguing triangular-shaped amulet of bead and shell, and a further 647 triangular pieces of cloth stitched on to the frill of the skirt. It was said to come, vaguely, from ‘Kohistan’, meaning ‘land of the mountains’, the name of a number of places in Afghanistan, Iran, Pakistan, and Tajikistan. Sheila was determined to find out where the dress had come from and to learn what she could about the symbols and their protective or talismanic qualities, in particular that of the triangular-shaped amulet.

Armed with ‘five kilos of baggage and a litre of vodka’, in 1990 she set off for the Hindu Kush. She thought she might find tasselled triangles worn as amulets or stitched on to the clothing of women in the mountains of Kohistan … but which Kohistan? Travelling alone in increasingly dangerous territories, she was smuggled into Afghanistan by the Mujahideen, hidden under the folds of a burqa. This initial journey was followed by trips to Pakistan, India, Central Asia, Europe, and North Africa among others, all with the same aim in mind. Everywhere she went she worked closely with women, often isolated in their homes, and between them embroidery became a common language.

Rifle cover (incomplete). Sherakot, Kohistan, Pakistan. Embroidery with protective symbols is often used in the violence of combat. Even the Mujahideen who smuggled Sheila Paine into Afghanistan had richly embroidered covers for their guns. In this example, embroidered triangles have been added to the edges, creating a protective amuletic border. Solar motifs run up the centre. (Copyright Pitt Rivers Museum, University of Oxford. Accession Number: 2008.116.8) 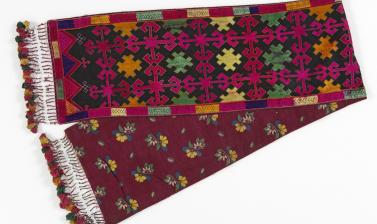 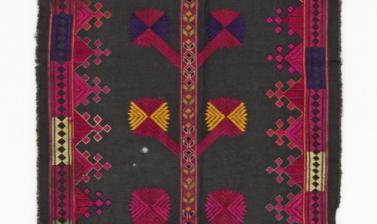 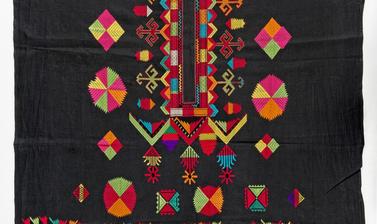 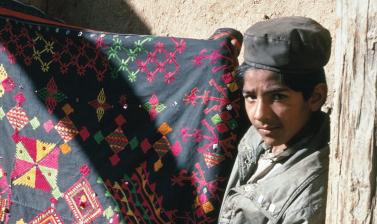