Reading the Ruins: Alfred Maudslay and the Maya Site of Quirigua, Guatemala

Alfred Maudslay and the Maya Site of Quirigua, Guatemala

This case display presents ten mounted prints by Alfred Percival Maudslay (1850–1931), known as the father of Mesoamerican archaeology, alongside related material concerning his pioneering work during the early 1880s at the Maya site of Quirigua, Guatemala. First visiting Central America in the aftermath of the discovery of the Maya civilization, Maudslay was sufficiently intrigued by the strange stone ruins found in the forest to embark upon a monumental project to record as thoroughly as possible what survived, recognising their significance as the remains of a once great people. His archaeological work across several different sites, which continued for more than two decades and required numerous further visits to the region, laid the foundation for generations of scholars to come, ultimately providing the basis for the decipherment a century later of the Maya language itself.

Following his first encounter with the Maya ruins in the spring of 1881, Maudslay returned to Quirigua the following year; and a larger expedition was undertaken from February to May 1883, ‘this time more fully equipped for the work’. This work involved not only producing an extensive photographic survey of the site, developing his images as large glass plate negatives, but also taking moulds of the monuments. From the beginning Maudslay understood that a three-dimensional record would be needed if the surviving Maya remains were to be fully analysed by future generations of archaeologists and epigraphers, and to this end he set about producing a complete set of moulds of the monoliths. Once shipped back to London, the moulds and resulting plaster casts were used to produce exact drawings of the glyphs, which were published with the photographs in his Archaeology (1889–1902), later bound to form a comprehensive record of the Maya ruins of Central America. The result was a magnificent work of documentation which, in the words of Maudslay’s biographer, is ‘valued as highly by modern scholars as it was by their predecessors a century ago’.

The monuments at Quirigua, it is now understood, were erected as part of a complex building programme which took place at the height of the city-state’s power during the Late Classic period. Carved from red sandstone, the stelae and zoomorphs use the iconography of Maya mythology to recount the later history of the city-state, their primary purpose being to legitimate and reinforce the power of the ruler. As the historian Matthew Looper has noted, however, the paradox of Quirigua’s earlier success in breaking from the neighbouring settlement of Copan in the end contributed to the complete decentralization of the region: ‘Abandoned to the encroaching jungle, Quirigua was to slumber in oblivion for almost a millenium until its rediscovery in the nineteenth century set modern scholars on the path of the rediscovery of its history.’ The ten prints here were bequeathed to the Pitt Rivers Museum by Prof E. B. Tylor, who had a long-standing interest in Central America. Although no documentation survives, they were probably sent to him by Alfred Maudslay himself in the mid-1880s, or in the aftermath of his principal work on the site. They represent a selection from a larger set of twenty-five, all showing the Maya site of Quirigua.

Zoomorph B (also known as Monument 2), south face, dated AD 780. ‘This monument is lying on three large slabs of stone’, Alfred Maudslay wrote in his survey of the Quirigua site. ‘It is carved into the shape of a great dragon with a human head, bust, and hands issuing from the dragon’s mouth.’ Photograph by Alfred Maudslay. Quirigua, Guatemala. 1883. (Copyright Pitt Rivers Museum, University of Oxford. Accession Number: 1998.182.2)

Stela D (also known as Monument 4), east side, dated AD 766. ‘The inscription on each side of the Stela is headed by an initial series of six squares of picture-writing’, Alfred Maudslay noted of this monument, ‘the remainder of the inscription being in the usual hieroglyphic script.’ Maudslay was correct in deducing that the glyphs, carved in high relief, recorded the date of the stone’s dedication, erected by the ruler of Quirigua in 9.16.15.0.0 7 Ahau 18 Pop (Maya Long Count calendar), or 19 February 766

Stela D (Monument 4), dated AD 766. ‘The north face of the monument is slightly broader than the south face, and is much the same in design’, wrote Maudslay in volume two of his Archaeology. The figure depicted on the carving is that of K’ak’ Tiliw Chan Yopaat, ruler of Quirigua in the mid-eighth century, while the sceptre suggests his control of the power of lightning, an allusion to K’ak’ Tiliw’s identification as the ‘lightning deity’ of Maya creation myth. Photograph by Alfred Maudslay. Quirigua, Guatem

Stela D (Monument 4), west side, dated AD 766. Maudslay has included in the photograph one of his local assistants, or mozos, to show the huge size of the monolith, nearly six metres in height. The sculpture is made of red sandstone, a stone not available in any quarry locally and which archaeologists now know was transported more than three miles to Quirigua. Stela D along weighs several tons. Photograph by Alfred Maudslay. Quirigua, Guatemala. 1883. (Copyright Pitt Rivers Museum, University of Oxford. Acc

‘Our Camp at Quirigua, 1883.’ A photograph taken by Alfred Maudslay and reproduced in his multi-part Archaeology (1889–1902), part of a larger series known as the Biologia Centrali-Americana.

Zoomorph G (also known as Monument 7), west side, dated AD 785. The monument is now understood by scholars to represent a ‘Waterlily Jaguar’, with human figures wearing headdresses emerging from both ends. It was created during the first year of the reign of Sky Xul, ruler of the city-state of Quirigua, and records details of the funeral ceremony of his predecessor K’ak’ Tiliw Chan Yopaat. Photograph by Alfred Maudslay. Quirigua, Guatemala. 1883. (Copyright Pitt Rivers Museum, University of Oxford. Accessio

Stela F (also known as Monument 6), east side, dated AD 761. ‘This is the most graceful and most elaborately decorated of all the Quirigua stelae’, Alfred Maudslay wrote of Stela F. ‘The graceful arrangement of the feather-work on the upper part of this monument is well worthy of note.’ Photograph by Alfred Maudslay. Quirigua, Guatemala. 1883. (Copyright Pitt Rivers Museum, University of Oxford. Accession Number: 1998.182.4)

Zoomorph P (also known as Monument 16), north face, dated AD 795. This massive stone carving, now understood to represent the Cosmic Monster of Maya mythology, was known by Alfred Maudslay as the ‘Great Turtle’, and can be seen marked on his map of the Quirigua site. The cartouches visible in the photograph, which surround the muzzle of the animal, have been of particular interest to Mayanists because they convey history relating to the founding of the neighbouring Quirigua and Copan dynasties. Photograph b

‘Moulding the Great Turtle, 1883.’ This photograph, which was published in Alfred Maudslay’s Archaeology, shows his assistant Lorenzo Giuntini working in the hot and humid conditions of Quirigua, preparing a piece-mould of Zoomorph P. The plaster of Paris mould, which in this case comprised over six hundred individual pieces, could afterwards be reassembled away from the site to enable a reproduction cast of the enormous stone carving to be made.

The ruins at Quirigua have been photographed many times since Alfred Maudslay’s pioneering work in the late nineteenth century, notably by several American archaeological expeditions which took place during the course of the last century, as well as by a growing number of tourists. This print, which was probably purchased by the archaeologist and epigrapher J. Eric S. Thompson when visiting the site, shows Stela E (also known as Monument 5), dated AD 771. Standing at over ten metres tall, Stela E was the la

An article published in Scientific American in August 1912, titled ‘Quirigua – An American Town 1,400 Years Old: Glimpses of an Extinct American Civilization’, written by Sylvanus G. Morley who led the first major excavation of the Quirigua site to follow Maudslay’s recording of the Maya ruins several decades earlier. The article summarised for a popular audience the work of the School of American Archaeology at Quirigua during its initial excavation season. 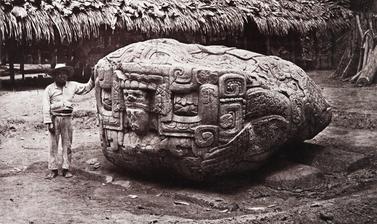 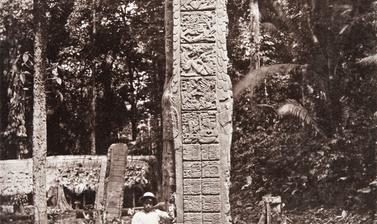 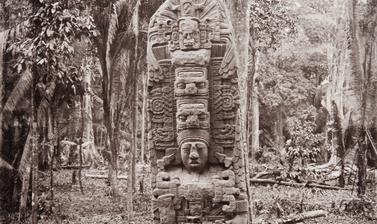 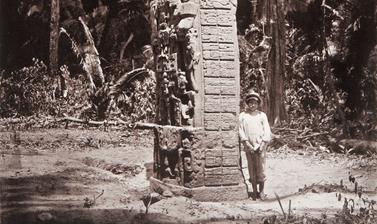 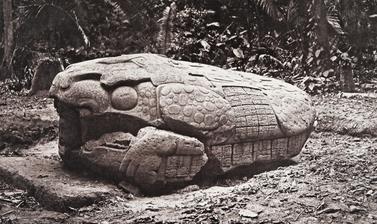 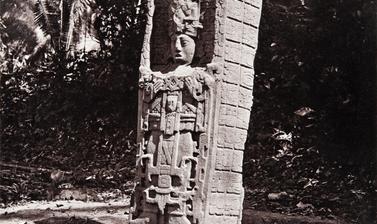 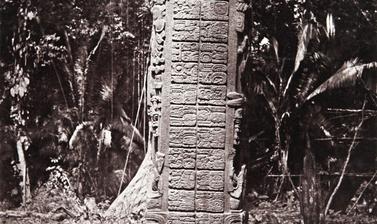 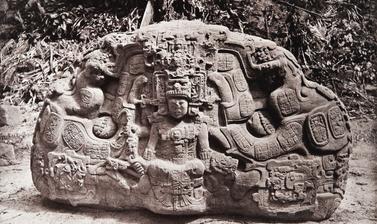 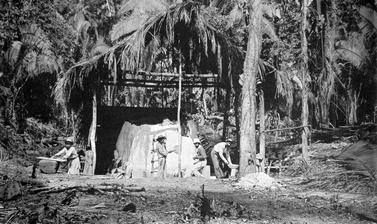 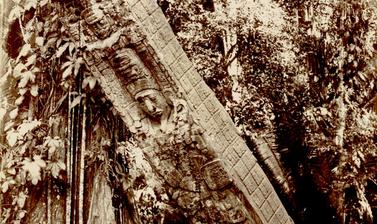 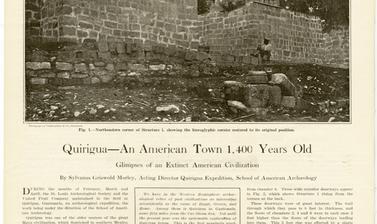