A Pioneer of Prehistory: Dorothy Garrod and the Caves of Mount Carmel

A Pioneer of Prehistory

Dorothy Garrod and the Caves of Mount Carmel

This display presents seventeen photographs from the collection of the archaeologist Dorothy Garrod (1892–1968), which was given to the Pitt Rivers Museum by her friend and executor Suzanne Cassou de Saint Mathurin in 1986. They include portraits of Garrod’s friends and mentors, as well as the famous excavations which she directed between 1929 and 1934 at the Wadi el-Maghara (Valley of Caves), on Mount Carmel in Palestine (now in Israel). Some of the Stone Age artefacts recovered from this fieldwork are also displayed, together with signed offprints of Garrod’s writings and her administrative notebook from the 1933 excavation season. The exhibition highlights not only Garrod’s career, but also some of the influences and teamwork upon which her achievements were based.

When Dorothy Garrod first came to Oxford in 1921 to undertake the University’s Diploma in Anthropology, she was one of only a small number of female students. The course at that time was under the direction of Robert Marett and it included classes taught in the Pitt Rivers Museum. It was Marett, Garrod later told her student Mary Kitson Clark, who inspired her to become a prehistorian. After two years further training in France under the Abbé Breuil, one of the leading prehistorians of the day, she undertook her first independent excavations on Gibraltar in 1925 and 1926. At that time the role of women in the emerging university discipline of archaeology faced a serious obstacle: excavation was considered to be a largely male pursuit. Yet Garrod seems to have had little trouble working in the field and she emerged as one of the outstanding archaeologists of the twentieth century.

During the course of her life, Dorothy Garrod conducted several other excavations – in Kurdistan (1928), Bulgaria (1938) and Lebanon (1958–1964) – but it was her involvement in the fieldwork on Mount Carmel which has had the greatest impact. This was the first work to establish the long sequence of human occupation in the Levant (modern Lebanon, Syria, Israel, Palestine and Jordan) and it revealed an archaeological sequence spanning nearly 500,000 years. This included material from both Neanderthals and Homo sapiens, and the caves which Garrod and her team excavated are still key to any discussion of the relationship between these two different human species. It also provided further evidence of a culture that Garrod was the first to identify – the Natufian – which dates between 12,000 and 9,500 BC.

Her publication of this site (with Dorothea Bates), entitled The Stone Age of Mount Carmel (1937), was a major landmark in its field. Two years later Garrod was appointed to the Disney Chair of Archaeology at the University of Cambridge, the first time that a woman had ever held the position of professor at either Oxford or Cambridge. In this again she was a pioneer, and her successes have been a source of inspiration for other scholars ever since.

Portrait of Dorothy Garrod outside a British cave sometime in the 1920s (possibly Langwith Cave, Derbyshire, where she excavated briefly in 1927). Garrod had wanted her first excavations to be in the UK and she had applied to dig at Kent’s Cavern in Devon. However, she was denied access to excavate and so in 1925 she accepted an invitation from her mentor Breuil to direct fieldwork at ‘The Devil’s Tower’ on Gibraltar Rock instead.

Dorothy Garrod outside Shukba Cave in Palestine, 1928. She was asked to excavate here following her very successful finds of prehistoric fossils and tools in Gibraltar. She is pictured standing alongside her collaborators, George and Edna Woodbury, from MacCurdy’s American School of Prehistoric Research. This is where she first identified the ‘Natufian culture’, which is now roughly dated to between 12,500 and 9,500 BC. (Copyright Pitt Rivers Museum, University of Oxford. Accession Number: 1998.294.161)

This photograph captures the condition of Tabun Cave before it was excavated in 1929. ‘By the end of the last season of excavations (August 1934)’, Garrod wrote in her 1937 excavation report, ‘the Tabun presented a very different appearance from the modest cave which was visible in 1929. The small pointed archway had widened into a vast irregular opening filled with a totally unsuspected thickness of archaeological deposit’.

This photograph was taken in 1929 from inside el-Wad, which was the second cave that Garrod worked in. A woman can be seen silhouetted in the right hand arch carrying debris from the excavations. Charles Lambert was the first person to demonstrate the significance of this cave a year earlier and it was his findings that sparked off Garrod’s six-year project at Mount Carmel. (Copyright Pitt Rivers Museum, University of Oxford. Accession Number: 1998.294.204)

Although Garrod is often considered the be the ‘heroic figure’ behind the excavations at Mount Carmel, she worked as part of a team. In her first season in 1929 the core of the western excavation team were all women. Here they stand in their camp in the Wadi-el-Maghara. From left to right: Dean Harriet M. Allyn (Mount Holyoke College), Dorothy Garrod, Elinor Ewbank (Lady Margaret Hall, Oxford), Mary Kitson Clark (Girton College, Cambridge) and Dr Martha Hackett.

This image shows an example of an important category of find from el-Wad: one of several Natufian burials. This one – number H.25 – is of an adult male that was found in 1931. His skull is adorned with a circlet made of seven rows of shells. (Copyright Pitt Rivers Museum, University of Oxford. Accession Number: 1998.294.169)

In 1931 four sites were under excavation simultaneously at Mount Carmel. The excavation directors of these are pictured in this original print. From left to right: Theodore McCown, Dorothy Garrod and Francis Turville-Petre. McCown excavated in the Cave of Skhul, Garrod oversaw work at el-Wad and Tabun, while Tuville-Petre took responsibility for work at the nearby site of Kebara. Garrod had overall responsibility for all the sites.

One of the most famous finds at Tabun was this skeleton, photographed in 1932. It is of a Palaeolithic Neanderthal female and is almost intact, which is very rare. Dating from around 120,000 years ago it is also the oldest known Neanderthal burial in the world. For these reasons it is often regarded as one of the most important Neanderthal fossils ever found. (Copyright Pitt Rivers Museum, University of Oxford. Accession Number: 1998.294.414)

This image shows the depth of Garrod’s excavations in the final 1934 season at Tabun. The photograph has been taken from Garrod’s layer B looking down to layer F at the bottom of the pit. In the background, Garrod’s camp can be seen, made up of some tents and a row of mud-brick cabins that the team named ‘Tibn Towers’. The local workers lived in a village some two miles away from the site. (Copyright Pitt Rivers Museum, University of Oxford. Accession Number: 1998.294.389)

Not only were western women directly involved in the fieldwork, but also the local inhabitants. Many developed expertise in the recognition of ancient fossils and stone tools. Dorothy Garrod is pictured here in 1934 with Yusra, who discovered the famous Tabun Neanderthal skeleton. There is evidence Garrod attempted to bring Yusra to Cambridge in 1936. (Copyright Pitt Rivers Museum, University of Oxford. Accession Number: 1998.294.480) 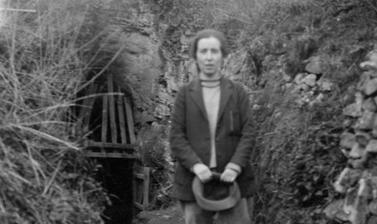 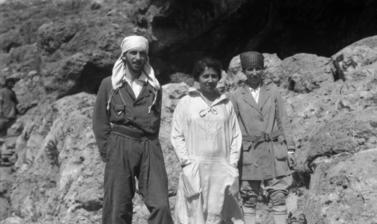 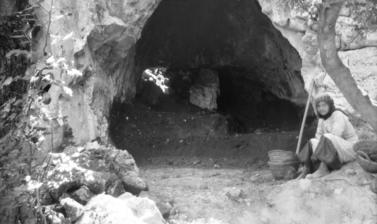 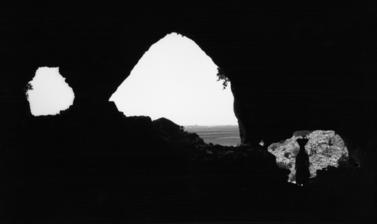 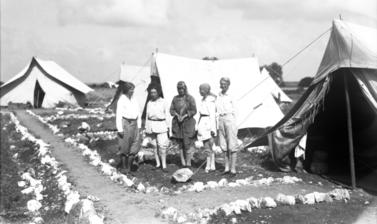 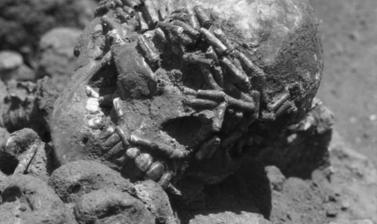 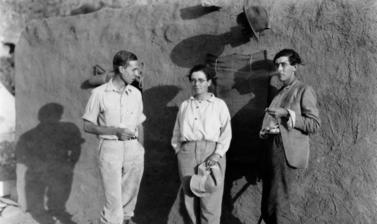 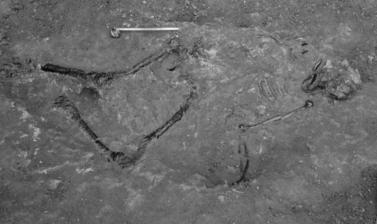 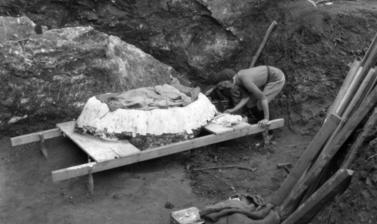 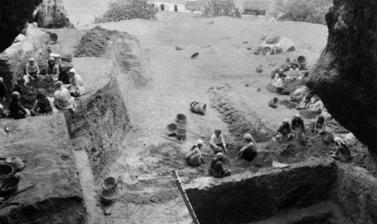 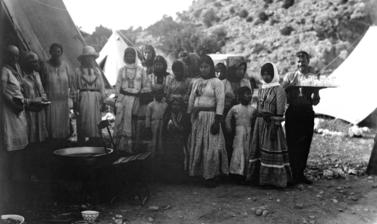 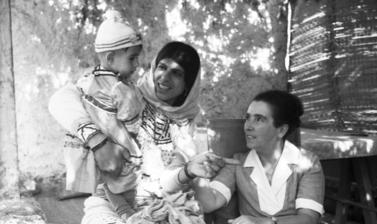