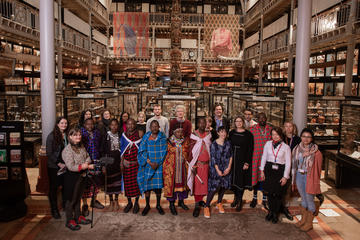 In 2017, after a visit from Tanzanian Human Right Activist, Samwel Nangiria, the Pitt Rivers Museum received a video from the Maasai Elders to voice their concerns that Maasai objects were held in the UK without consent and with interpretations that excluded Maasai voices. The Elders offered to start a conversation and, with the help of participatory film-makers, Insight Share, the Museum replied with an invitation to the UK. This visit began a long term relationship, centred on care that continues to develop actions for reconciliation, redress and self-representation.

Watch the short film in which Maasai Elders discuss their response to finding out that their cultural objects are in the Museum here.

The first of a series of collaborative conversations with Maasai from Tanzania and Kenya, team members from the Pitt Rivers Museum, Oxford and Museum of Archaeology and Anthropology, Cambridge and Oxford-based participatory film facilitators, Insight Share. These conversations will think through how people centred, listening relationships, that bring together our many ways of knowing, can shift and rebalance the power in UK museums.

For more information on the Living Cultures project (including a documentary-length film), see here.

The following people will be part of the Living Cultures conversations across the series.

Samwel Nangiria is a socio-environmental scientist and long-term human rights defender. He is a leader of Enguserosambu Community Forest Trust and the founding director of Oltolio Le Maa - a participatory video group that documents human rights issues, social development and Maasai culture.

Amos Karino Leuka is a teacher and long-time activist in cultural leadership and practices. He is a young member of the Loita council of elders and a member of the Land Committee in Loita. Amos is a founding member of the Pan-African Living Cultures Alliance.

Laura Van Broekhoven is the Director of the Pitt Rivers Museum, Oxford. Laura's current research interests include decoloniality, reconciliation and redress, with a focus on the importance of collaboration, inclusivity and reflexive inquiry.

Nicholas Thomas is the Director of the Museum of Archaeology and Anthropology in Cambridge and has curated extensively, often in collaboration with contemporary artists. In 2018/19 he co-curated Oceania for the Royal Academy of Arts and the Musée du quai Branly-Jacques Chirac in Paris. His books focus on cross-cultural encounters, colonialism, art and museums and include Possessions: Indigenous Art/Colonial Culture (1999).

Jessica Frankopan trained as an anthropologist at Cambridge, where her interests were primarily focused on contemporary East Africa. She has since worked with NGOs covering international developent and fair trade. In 1992, Jessica set up The Staples Trust, which has funded research in gender, the environment and indigenous peoples' rights. Jessica is currently researching the ways that cultural objects from Maasai societies have been collected, displayed and interpreted outside their original settings.

Speakers to be confirmed

Yannick Ndoinyo is a junior elder from Maasai Ololosokwan village, Loliondo. For several decades, he has been involved in defending and promoting land and human rights of the indigenous Maasai communities in Tanzania. Yannick is Executive Director of the Eastern Serengeti Trust (TEST).

Juliana Naini Mashati is an activist working around income generation for women. She is a founder of Maasai Treasures, an organisation supporting women through the craft of beadwork in Morijo.

Nick Lunch is Co-founder and Director of InsightShare.

Evelyn Paraboy Kanei is from the Ilparakuyo Maasai community. She has worked to support community development since 2010, addressing the challenges that hinder sustainable livestock production. In her work, Evelyn has focussed on community history and post-colonial relations. She holds a degree in Accounting from Concordia College in Moorhead, Minnesota, and a Master of Business Administration from the University of Mary in Fargo, North Dakota, USA.

Francis Shomet Ole Naingisa, custodian of the Maasai culture through the Ilkitoip Age Group and lecturer on the Maasai Cultural Anthropology for International Honours programme students from Boston University.

Scholastica Ene Kukutia is a women's rights community activist in Kenya. She uses participatory video to promote women's economic independence within her Maasai community. She supports traditional beadwork and has established an organisation, Olmaa Makes, that sells Maasai-made beadwork and pours the profits back into women's initiatives, education and up-skilling.