Dwelling: In This Space We Breathe by Khadija Saye

Dwelling: In This Space We Breathe by Khadija Saye

This Upper Gallery exhibition presents a series of nine silkscreen prints by artist Khadija Saye (1992-2017) exploring her fascination with the ‘migration of traditional Gambian spiritual practices’ that formed a part of her childhood experience growing up in London with Gambian parents.

In the images, Saye uses ritual objects, such as amulets, beads and horns, to explore her connection to these spiritual practices as a member of the African diaspora, as well as how ‘trauma is embodied in the black experience’.

The series also explores what Saye calls ‘the deep-rooted urge to find solace in a higher power’ in differing cultures. Saye herself was of mixed religious heritage, both Christian and Muslim.

Khadija Saye achieved recognition as a hugely talented and promising artist and was the youngest exhibitor in the Diaspora Pavilion at the 2017 Venice Biennale, where her work was shown alongside artists such as Isaac Julien and Yinka Shonibare.

In the notes accompanying her display of these works in 2017, Saye notes:

The series was created out of the artist’s personal need for spiritual grounding after experiencing trauma. This work is based on the search for what gives meaning to our lives and what we hold onto in times of despair and life changing challenges. We exist in the marriage of physical and spiritual remembrance. It is in these spaces that we identify with our physical and imagined bodies. Using herself as the subject, Saye felt it was necessary to physically explore how trauma is embodied in the black experience. The objects used in the images are sacred and come from different spiritual healers in Gambia through a means of exchange and prayer.

Whilst exploring the notions of Gambian rituals, the process of image making became a ritual in itself. The journey of making wet plate collodion tintypes is unique; no image can be replicated and the final outcome is beyond the creator’s control. Within this process, you surrender yourself to the unknown, similar to what is required by all spiritual higher powers: surrendering and sacrifice. Each tintype has its own unique story to tell, a metaphor for our individual human spiritual journey. The process of submerging the collodion covered plate into a tank of silver nitrate ignites memories of baptisms, the idea of purity and how we cleanse in order to be spiritually sound. The application of the collodion transcends the photographic process; it is a reflection, a physical manifestation of the artist’s subconscious relationship to traditional African spirituality.

The process involved with tintypes addresses the current disposable era where materials are rapidly produced and short lived. We forget to live through the moment, remaining in the silence, and working on our internal connections.

Tragically, both Saye and her mother Mary Ajaoi Augustus Mendy were killed in the Grenfell Tower fire of 14 June 2017. Later that year, Saye’s photographs were exhibited in the Diaspora Pavilion at the 57th Venice Biennale, and she was widely regarded as an artist of great promise.

The prints exhibited here were produced from scans of the artist’s original tintype photographs. Tintypes are an early form of photograph, popular from the 1860s, created by exposing a negative image onto a metal surface coated with emulsion with a dark background so as to appear positive.

Khadija Saye was an inspirational artist whose social and political awareness led her to support issues of social justice and educational opportunity. The Pitt Rivers Museum has acquired this set of prints as a permanent tribute to the artist and her values, and exhibits them here to bring them into conversation with many displays in the Museum that relate to the themes she explores.

For further information, and to contact the artist's estate about reproduction of these works, please click here.

Works purchased with the generous support of ACE/V&A Purchase Grant Fund and Friends of the Pitt Rivers Museum. 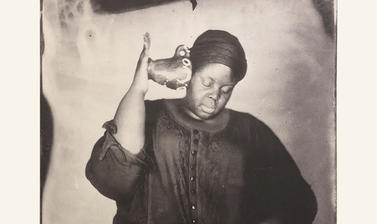 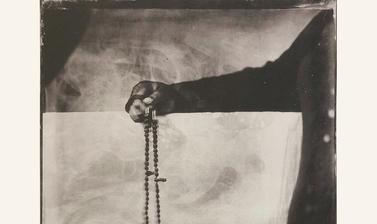 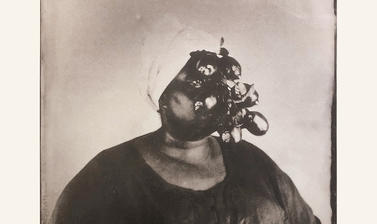 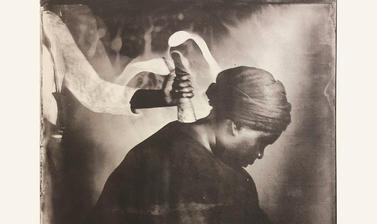 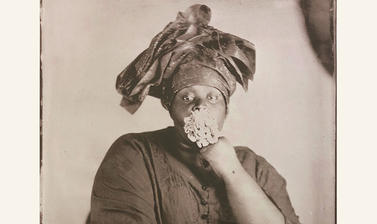 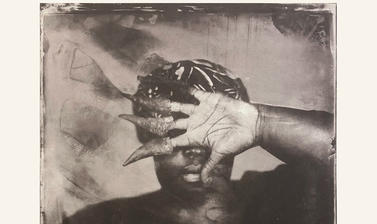 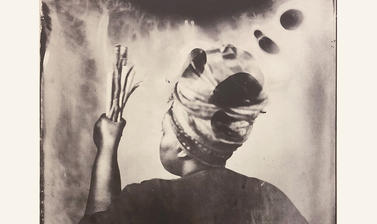 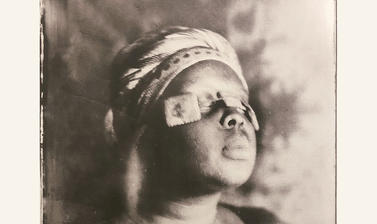