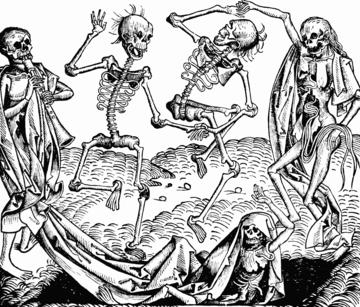 Death is a serious subject and every society develops rites and rituals around it. At the 2022 Kenneth Kirkwood Lecture Day, four eminent speakers will talk on the subject of Last Rites in different cultures.

Coffee and tea will be available.

Professor Chris Gosden, President of the Friends of the Pitt Rivers Museum (FPRM)

We all know how differently different cultures disclose of their dead. Funeral pyres were the norm in Ancient Greece and Rome and are still normal for many Hindhus and Sikhs in India, despite what now appears as excessive use of wood and excessive carbon emissions. As a spectacle, a pyre is a potent symbol of death, as it is generally the fastest way to end the physical existence of a person's remains. The word 'pyre' is a straight transliteration of the Ancient Greek word for fire and in Hindhu, as in ancient European thought, the fire consuming a body is taken as a rite of purification - whereas for Zoroastrians, who hold fire as the ultimate sacred symbol, using it to burn a body would pollute it, while for Christians (in early centuries) and Muslims, cremation was a pagan rite that aimed to avoid the 'day of judgement' when the buried dead would rise from their graves. This illustrated talk will articulate the living reality of Hindu funeral pyres, from the place where it is often seen in Varanasi to its use in rural India. The practice of sati once formed a conspicuous part of the funeral pyre tradition, evoked for the western world in traditions such as Achilles' human sacrifice of Trojan youths and maidens to accompany the cremation of his friend Patroclus. Funeral pyres in India continue a tradition of a highly visible commentary of conflagration on death.

Felix Padel is a social anthropologist/sociologist trained in Oxford University and the Delhi School of Economics, presently affiliated to the School of Social and Cultural Anthropology, University of Oxford, and a Research Associate at the Centre for World Environment History, University of Sussex. As well as many articles and positions held, Felix has written three books: Sacrificing People: Invasions of a Tribal Landscape (1995/2010), Out of This Earth: East India Adivasis and the Aluminium Cartel (with Samarendra Das, 2010) and Ecology, Economy: Quest for a Socially Informed Connection (with Ajay Dandekar and Jeemol Unni, 2013).

Current UK funeral options embrace traditional burial, cremation (with its multiplicity of ash destinations) and woodland burial as its own inviting transition into environmental modes of body disposal. More recently plans are afoot for introducing the innovation of the alkaline hydrolysis of human bodies in the UK, whilst other contemplate the composting of corpses. Some of these practices are framed by either extensive of minimal ritual practice, with and without clerical and secular celebrants, with the Covid crisis period also affecting the idea of 'no fuss funerals'. These technological, organic and commercial modes reveal our human imagination playing with death, fostering emotions from grief to celebration and perhaps, cultivating choice as its own form of death-conquest.

Professor Douglas Davies is a theologian, anthropologist and academic specialising in the history, theology and sociology of death. He trained in anthropology and theology at Durham and Oxford Universities, and after some years at Nottingham University, moved to Durham where he is now Professor in the Study of Religion and Director of the Centre for Death and Life Studies. His research projects embrace woodland/natural burial, the reuse of graves, cremation, Anglicanism and Mormonism. He initiated the Encyclopaedia of Cremation (2005), as well as publishing such monographs as The Theology of Death (2008), Mors Britannica: Lifestyle and Death-Style in Britain Today (2015) and Death, Ritual and Belief (3rd ed. 2017), as well as others covering Mormonism and the interplay of anthropology and theology.

Professor Jeremy MacClancy will talk about how these locally used items have become part of the international art market and how no museum seems complete without at least one.

Jeremy MacClancy came to Oxford when 18 and is still here, now as Professor of Social Anthropology, Oxford Brookes University. In 1978 he went to Vanuatu in the South Pacific for a year but stayed four years, out of a sense of academic duty. He then lived in Navarre, northern Spain for four years, which was not as different from Vanuatu as some might think. He has also done fieldwork among modernist artists in Nigeria, ageing hippies in the West of Ireland, and British residents in expatriate colonies in Spain. For many years he taught a course on the Anthropology of Art at Brookes, until told there was no longer space for it on the curriculum - shame!

Shahin Bekhradnia will talk about the changes in Zoroastrian death rituals necessitated by various social and political circumstances. Towers of Silence are probably among the best known features of Zorastrianism but why did they evolve and how did they function? With the decline in vulture populations and the encroachment of urban settlements, the community has had to look for alternative solutions which maintain the underlying environmental ethic.

Shahin Bekhradnia completed her undergraduate and post-graduate degrees at St Hilda's and St Anthony's in Oxford. She was raised by Iranian Zoroastrian parents who inspired her to investigate her roots, which were firmly based in the Yazdi tradition of her priest/poet/stargazing grandfather. Her thesis on the changing identity of Iranian Zoroastrians through the 20th century provided the opportunity to consider the interface of modernity and traditional practices, and to ponder upon the prospect of extinction as a community. She is the Religious Affairs Spokesperson for the World Zoroastrian Organisation, was a magistrate, teacher of Ancient History & Classical Civilisation and an active trustee with a charity for the Homeless with Addictions.

Please note that there will be a 10% discount in the PRM shop for all attendees on the day on presentation of this programme. There is a 20% discount (usually 10%) for Friends on non-book items only.

The Friends of the Pitt Rivers Museum are very grateful to all the speakers for giving their time so generously, and to the Director and staff of the Museum for allowing us to use the facilities.

All the profits from this lecture day will be added to the Kenneth Kirkwood Memorial Fund. The primary purpose of this fund is to support Pitt Rivers Museum staff to undertake travel associated with their work. Priority is given to those with no access to other funding. The Friends of the Pitt Rivers Museum is a registered charity.