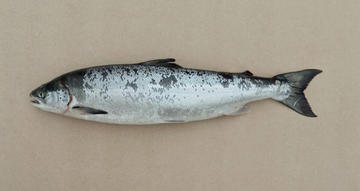 Autumn Salmon (2017) is created by Eiko Soga, who is a doctoral student at The Ruskin School of Art and St John's College, Oxford. In 2016, Eiko lived with an Ainu woman called Ms. Katsue Kaizawa and studied the making of Ainu kimono, embroidery and salmon-skin shoes. In this video, she focussed on the idea of process and making-as-sensory-study. In Ainu culture, salmon traditionally served key economic, religious and spiritual roles. Today, it still plays an important role within Ainu communities but primarily to sustain their traditional values. In this video, we see a text that Eiko wrote about Ainu social phenomena centred on salmon. This process allowed her to explore a wider understanding of Ainu culture - fishing, cooking, politics, economics, ecology, craft, gossip, folklore, and differences between the current Ainu communities in other regions. It was a process, in part, of finding clues from the past that shed light on present issues.

This display is in collaboration with TORCH's Japan Season 2021.