This collection of watercolours was given to the Pitt Rivers Museum in 1933 by a Miss Wakefield (or Miss Warwick, as the records vary) of Reigate. They are examples of costumbrismo, a genre of painting with Spanish origins that became popular in South America in the early 19th century. In such paintings, regional types are represented, the standard format being single figures painted against plain backgrounds on single sheets.

By the 1830s, the genre was so popular that copies were being made in Canton, China, and exported in large numbers to Lima and elsewhere. Travellers purchased such paintings as souvenirs, mounting them in albums as illustrations of their journeys – much as later travellers would mount photographs. In addition to collecting examples, some travellers, in particular it seems naval officers, painted their own versions.

All the paintings displayed here appeared to be by the same hand. Given that the Museum was informed by the donor that the paintings were by W.F. Carter and that they are all signed ‘W.F.C.’, it seems safe to conclude that Carter was the artist. Recent research has identified him as William Foster Carter (c.1800–63), who served as a medical officer in the Royal Navy from August 1828 to October 1845, when he retired on half pay.

From 1829 to 1832, Carter served as assistant surgeon on HMS Seringapatam (under Captain William Waldegrave), which was based at the Royal Navy’s South American Station in Rio de Janeiro, Brazil. In late 1829, the Seringapatam left Rio, rounded Cape Horn and sailed up the west coast of South America, visiting Valparaiso and Coquimbo on the coast of Chile, before setting off on a voyage into the Pacific. The Seringapatam returned to South America in late July 1830, anchoring in Callao Roads, the main port of Lima, before spending most of the next two years sailing up and down the coast.

The ship’s officers made excursions overland to Lima in Peru, Santiago in Chile, and elsewhere. Carter would have had ample opportunity during these excursions to acquire a collection of costumbrismo. His watercolours, however, appear to be his own versions of such paintings: some perhaps inspired by – if not copied from – examples belonging to his fellow voyagers or from illustrations in books, others perhaps painted from life or at least informed by his own observations.

All the works are in pencil, ink and watercolour on paper, and signed ‘W.F.C.’,  to which ‘R.N.’ or ‘M.D. R.N.’ has been added in some cases. They are numbered and more-or-less repetitively captioned (on both the front and back) in idiosyncratic Spanish and English in what appears to be the same hand. The paintings are mounted on sheets of paper that may well have been cut from the pages of an album.

Research on the collection continues. There are two objects in the Pacific collections at the British Museum that were collected by Carter during the voyage of the Seringapatam. There is also an unconfirmed report of a Dr W. F. Carter of Abington giving a talk in November 1832 to the Royal Society about the ancient mummies of Arica (which the Seringapatam visited in 1831 and early 1832) ‘accompanied by some clever drawings’. Museum staff are following up these leads, as well as the records of the voyage – preserved at The National Archives, the National Maritime Museum, and elsewhere – in the hope of being able to learn more about Carter and his intriguing watercolours.

A mounted muleteer, one of a series of Brazilian types from Rio de Janeiro. The Royal Navy’s South America station was at Rio de Janeiro. The Seringapatam’s captain William Waldegrave reported to Rear Admiral Thomas Baker whose flag-ship HMS Warspite was based there. (Copyright Pitt Rivers Museum, University of Oxford. Accession Number: 1933.53.1)

A musician from Rio de Janeiro. The Seringapatam was anchored at Rio in the latter months of 1829 and from June to August 1832.

A tortilla-seller, one of a series of Peruvian types from the market in Lima. Carter probably visited Lima when the Seringapatam was anchored in Callao Roads in July 1830, August 1831, and January/February 1832.

A ‘Botucundan’ Indian of Peru. It is unlikely that Carter saw such Indians, so this portrait is likely to have been copied from another artist’s work.

One of six portraits of inhabitants of Terra del Fuego as seen by the artist in January 1829 as the Seringapatam rounded Cape Horn.

A fisherman from Chile on a raft made of inflated bullock hides. The Seringapatam spent the early years of 1830 and much of 1831 and 1832 sailing up and down the coast of Chile.

A Chilean gaucho or cowboy, dressed in characteristic hat, poncho, and leggings, and holding a lasso. 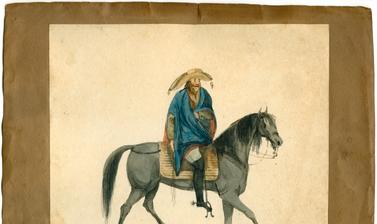 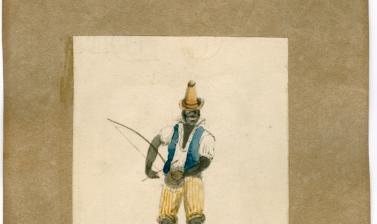 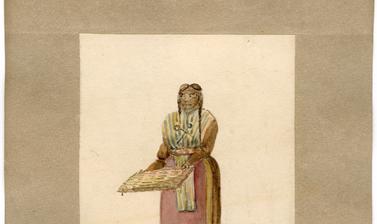 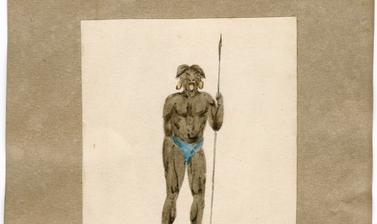 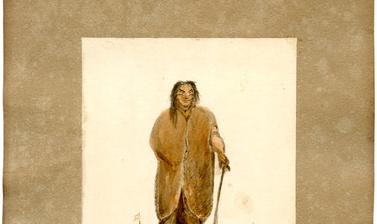 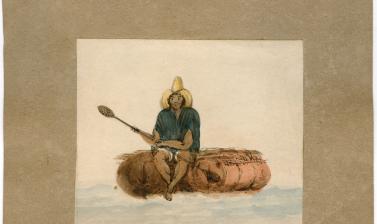 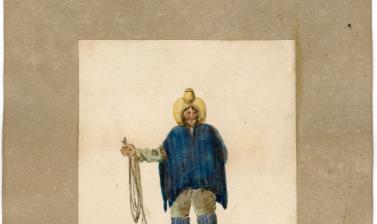