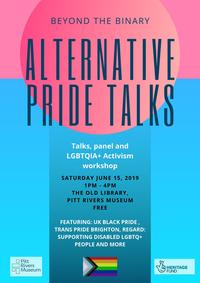 Join the Beyond the Binary Project and the Queer Studies Network for an afternoon looking at alternative possibilities to mainstream pride and better representation within the community. In addition, we will be looking at the heritage of LGBTQ+ activism through material culture.

13.00 - 13.00  Talks from UK Black Pride, Trans Pride Brighton and Regard: Supporting Disabled LGBTQ People, followed by a panel discussion with local organisers and activists, including Oxford Pride and Common Ground.

15.00  Activism 101 Workshop with Jack Doyle of Action for Trans Health.

This event is free and wheelchair accessible. Please email beyondbinary@prm.ox.ac.uk if you have any further access requirements.

In order to improve accessibility, the speaker section and panel will be streamed via Facebook live, so please do join in the discussion if you can't attend in person.

Snacks and refreshments will be provided.

In addition to being the Communities Communications Officer for UK Black Pride, Anick is an intersex activist, creator and researcher. His aims are to serve, empower and represent those who are traditionally left behind. Anick is passionate about equity, diversity and inclusion with a particular focus on issues that affect the LGBTQIA+ communities.

Sarah Savage took part in the 2011 Channel 4 miniseries My Transsexual Summer which documented the first few months of her transition. In 2013 she was part of a small team which founded the UK's first Trans Pride event in Brighton and has overseen the protest march ever since. Trans Pride Brighton is now a registered charity and has grown over the years, now catering to more than 7000 trans, non-binary, intersex, gender variant people every year. Sarah is also a published children's author, writer and activist speaker.

Ju Gosling is a 50-something disabled webmaster and multimedia storyteller, who works mainly with digital lens-based media but also with performance, text and sound. Ju works largely within the theories and traditions of the Disability Arts movement and has gained an international reputation for her work. Ju also co-chairs Regard, the national LGBT disabled people's organisation, and represents LGBT disabled people on a number of national and local committees, including the Social Care Institute for Excellence's Co-Production Network and its steering group. Ju was recently named by QC Magazine as an 'unsung hero of the gay scene' for this work.