Across the Caucasus: Photographs and Manuscripts from the John F. Baddeley Collection

Photographs and Manuscripts from the John F. Baddeley Collection

This case display presents a selection of photographs, manuscripts and exquisite published material by the writer and traveller John F. Baddeley (1854–1940). Born and raised in England, John Baddeley was introduced to Russia and its cultures by Count Peter Schouvaloff, the Russian Ambassador in London, a family friend with whom he first visited Russia in 1879, and through whose auspices he subsequently secured the position of special correspondent to the (London) Standard newspaper in St Petersburg, a post which he held for ten years. ‘Baddeley never led his editors astray’, Sir Charles Hagberg Wright later recalled, ‘and his knowledge of the languages and his access to sources of information in the highest Russian circles which were available to no other Englishman in Russia materially helped to enhance the reputation of his paper and were not infrequently of great use to the Embassy in St. Petersburg.’ It was during a routine assignment for the Standard, when he was reporting on an offical visit of Tsar Alexander III to the Caucasus in 1888, that Baddeley first made acquaintance with the Caucasus (between the Black Sea and the Caspian Sea), starting an interest in the region and its peoples which in time led to the production of his first important historical work, The Russian Conquest of the Caucasus (1908).

‘During the years that he was Correspondent to the Standard, and later when he embarked on a quasi-commercial career in Siberia, on the Amur River, and in the Caucasus, his leisure moments were fully occupied in historical, antiquarian, and anthropological research’, records a memoir published on Baddeley’s death in 1940. ‘In the unexplored regions of Manchuria and of Asiatic and Southern Russia, where in the course of business he travelled widely, Baddeley became familiar with the manners and customs of the people of the various races around him as well as with the ethnology and archaeology of these regions. These journeys enabled him to gather together a mass of information from hitherto entirely unexplored sources.’ It was during his travels in the Russian Far East that Baddeley amassed much of the information for his monumental Russia, Mongolia, China (1919), displayed here with its original artwork, for which he was awarded the Victoria Medal of the Royal Geographical Society. Based on original documents located in various Russian achives and acknowledged immediately for its presentation of information unavailable elsewhere, Baddeley’s obituary in The Times later noted ‘“Russia, Mongolia, and China” will remain a mine of information on that period.’

Following his retirement, initially in London and later in Oxford, Baddeley developed an interest in painting flowers and during his last decade wrote an account of his earlier travels in the Caucasus, a period of reminiscence which the Georgian scholar Sir Oliver Wardrop described as being ‘as happy as any previous period of his life’. Published as The Rugged Flanks of the Caucasus (1940), the two-volume book was again beautifully produced, with reproductions of Baddeley’s drawings made after the photographs which he had taken several decades earlier, some of which are displayed here. Appearing posthumously, the work stands testament to the passion for the Caucasus region of an experienced traveller and thorough scholar and remains of interest today for its careful record and acute observation of ethnographic detail. John Baddeley’s photograph album and personal papers, together with the author’s own copy of Russia, Mongolia, China, were donated to the Pitt Rivers Museum in 2001 by Lady Cicely Nepean.

Man in the mountain village of Gornaya Saniba in the western Caucasus. ‘Most of the houses at Sanibá were of stone, the flat roofs made of little slates, though one or two had roofs of iron.’ Photograph by John Baddeley. Gornaya Saniba, Republic of North Ossetia-Alania, Russia. August 1902. (Copyright Pitt Rivers Museum, University of Oxford. Accession Number: 2001.34.2.16)

People in front of the church at Dallagkau near Kazbek. ‘On our return to Dallag-kau I was asked to photograph about half the village population, but escaped with a couple of groups, including one of the priest’s numerous family’. Photograph by John Baddeley. Dallagkau, Republic of North Ossetia-Alania, Russia. August 1902. (Copyright Pitt Rivers Museum, University of Oxford. Accession Number: 2001.34.2.33)

Frontispiece of John F. Baddeley’s Russia, Mongolia, China: Being Some Record of the Relations Between Them from the Beginning of the XVIIth Century to the Death of Tsar Alexei Mikhailovich, A.D. 1602–1676, etc., 2 vols. (London, 1919). (Copyright Pitt Rivers Museum, University of Oxford. Balfour Library, q (PN) KS bad.)

Letter of introduction from the British Ambassador in St Petersburg, 11 March 1893: ‘The bearer of this, Mr J. F. Baddeley, is charged with a bag of dispatches to Her Majesty’s Ambassador at Vienna.’ (Copyright Pitt Rivers Museum, University of Oxford. Baddeley Papers, Box 2.)

Letter written by John Baddeley to his mother, 20 May 1904, and sent from Baku: ‘I arrived here safely last night or rather - this morning at 2 o’clock after a comfortable if wearisome journey. It is a great blessing not to have to change all the way from Moscow to Baku. In former days we changed in Rostoff & waited hours in a stuffy station in the night.’ (Copyright Pitt Rivers Museum, University of Oxford. Baddeley Papers, Box 2.)

Oil spout on fire at Baku, now the capital of Azerbaijan, which was the centre of frenzied oil speculation in the 1890s. This image was reproduced in John Baddeley’s last major work, The Rugged Flanks of the Caucasus, published shortly after his death in 1940. (Copyright Pitt Rivers Museum, University of Oxford. Accession Number: 2001.34.2.108)

John Baddeley’s study at 10 Keble Road, Oxford. The large collection of rare books, many of which were donated to the London Library, and the numerous clippings from newspapers and magazines attest to Baddeley’s wide-ranging interests and erudition. Photographer unknown. Oxford, England. Late 1930s. (Copyright Pitt Rivers Museum, University of Oxford. Accession Number: 2001.34.3.1)

Letter from the Editor of The Observer written following John Baddeley’s death at the age of eighty-five in February 1940. The recipient, John Johnson, was responsible for printing Baddeley’s last work, a two-volume account of his earlier travels in the Caucasus published posthumously by Oxford University Press as The Rugged Flanks of the Caucasus (1940). (Copyright Pitt Rivers Museum, University of Oxford. Baddeley Papers, Box 2.) 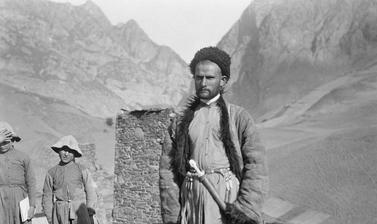 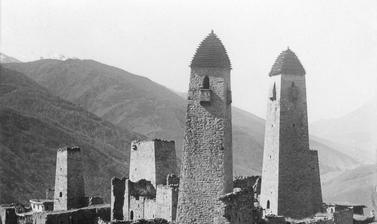 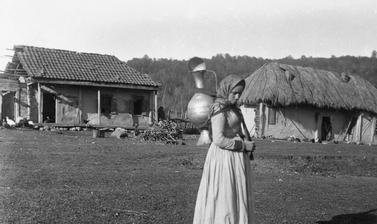 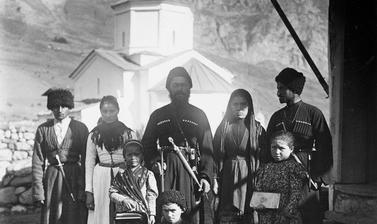 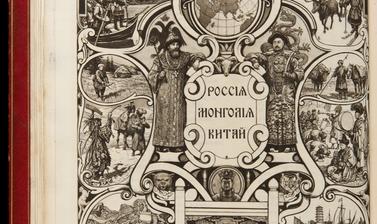 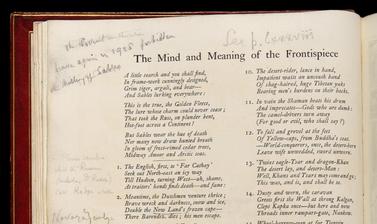 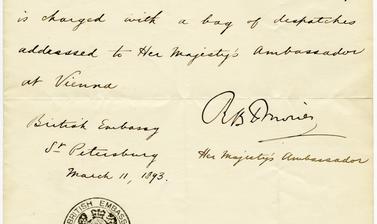 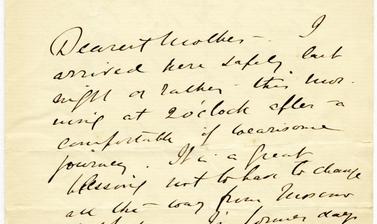 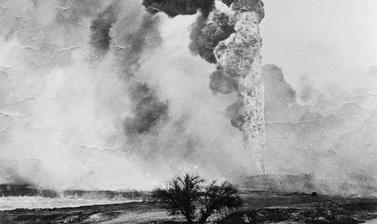 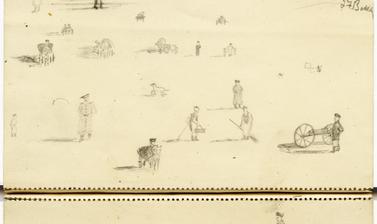 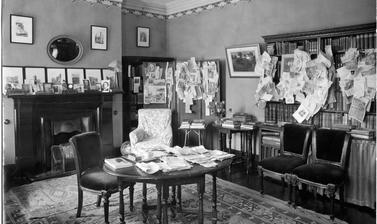 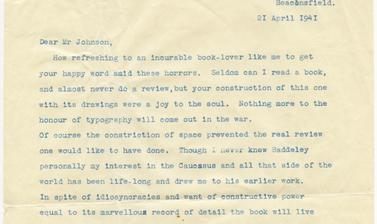