Shakira Morar (Beyond the Binary community curator) explains why she chose necklaces to explore the life of Catherine Hilda Duleep Singh and share her stories in the exhibition.

Who was Catherine Hilda Duleep Singh?

“Catherine was a Sikh princess and suffragette, born in the 1800s. She had a relationship with her governess, Lisa Schaeffer. They lived in domestic harmony in Cassel, Germany, after Catherine completed her education at Somerville College in Oxford.”

Catherine Hilda Duleep Singh was a queer woman of colour who lived life on her own terms despite the societal restrictions and judgements of the Victorian era. Although she experienced intersectional oppression, she managed to live a wonderful life with her lover Lina Schäfer. Historians have called them close friends, but their lifestyle suggests they were a lesbian couple. Only recently have they been acknowledged as lovers (see Sophia by Anita Anand, published in 2015).

Throughout history, queer women of colour have endured hardships but have been erased, forgotten or omitted. Catherine’s story is one of conflict but also hope. She supported the peaceful Fawcett Suffrage movement (a group that differed from Emmeline Pankhurst’s Suffragette movement, which has been criticised for promoting white feminism and excluding women of colour). She was also goddaughter to Queen Victoria, a monarch who ruled a country that had colonised India, Catherine’s ancestral home. Despite judgement from her peers and family, Catherine advocated for women’s rights, supported her family and cared for Lina when ill. Her story has not yet been told but she was fearless and authentic.

Catherine often wore necklaces, which are displayed on the chest for everyone to see, close to the heart. I thought that Catherine took pride in loving who she wanted to, so necklaces are the perfect symbol of her identity. The string of prayer beads is from Punjab, India which is the region where her father (the 5th Maharaja of the Sikh Empire) was born. She visited Amritsar, Punjab (the principle sacred site of Sikhism) in her lifetime. Catherine was a Sikh and so the prayer beads have religious ties to her identity.

The gold marriage necklace is also from India and was offered to a goddess at a shrine. Catherine and Lina lived like a married couple. In India, gold symbolises prosperity and Catherine had a prosperous life. Gold jewellery is often passed down the generations in Indian families and so the necklace also ties Catherine with her family, and Lina, whom she treated like family.

The pearl necklace symbolises purity and piety. Catherine had a pure heart and was loyal to Lina. In the Victorian era pearls marked a person’s class. This necklace represents the English aspect of Catherine’s identity and her position as a princess living under the privileges of Queen Victoria, including an education at Oxford University.

The necklace mounted with beetles and pearl is from Germany, representing Lina’s identity.

1990.16.1 Imitation mungala sutra or marriage necklace (Dharwad, Karnataka State, India, Asia), in the form of a pair of gold breasts, for offering to a goddess at a shrine. Copyright Pitt Rivers Museum 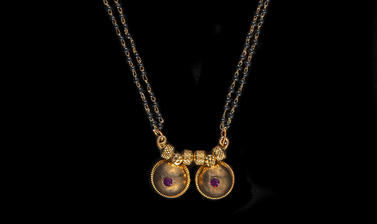 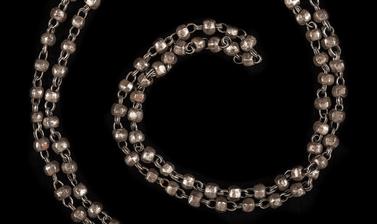 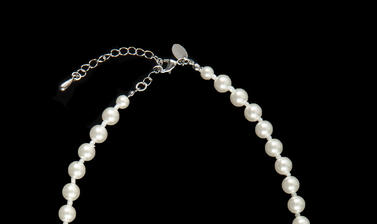 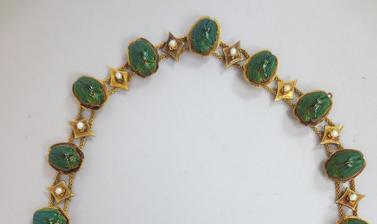