Catherine de Guise ( Beyond the Binary community curator) shares her perspectives on objects representing the Buddhist bodhisattva of compassion, known in China as Guanyin.

Gender and the representation of the Buddhist bodhisattva Guanyin

At a time when there is backlash against different gender identities, I think it is important to show people that gender binaries as we know them are not universal.

The bodhisattva* that originated in India around the eleventh century as Avalokitesvara, came to be reinterpreted in China and Japan from the twelfth century and known as Guanyin. Avalokitesvara was originally depicted as a man, so is often seen wearing chest-revealing clothes and possibly even a moustache. In China, Guanyin is usually perceived as a woman, though there are many signs of masculinity and some people have seen her as a genderless being. In more modern times she has increasingly been represented as a woman, possibly due to more interaction with ‘Western’ ideas of gender and ‘Marian influences’ from Christian iconography (Mariology is the theological study of Mary, the mother of Jesus). 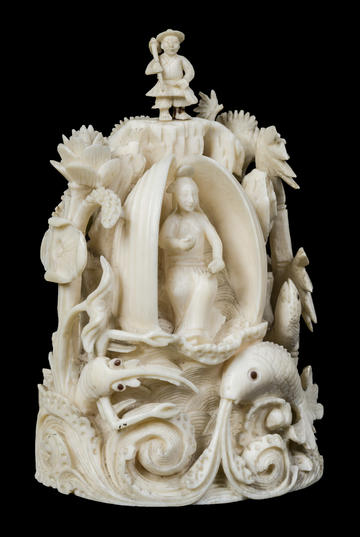 This figure of Guanyin was taken from China in 1841. The nineteenth century museum caption suggests that Western observers could have trouble understanding her gender ambiguity. The writer remarks that ‘Kwanwin is not shewn with breasts’, perhaps confounding their gender expectations. They also noted a ‘European influence’ in Guanyin’s pose, claiming it as reminiscent of Aphrodite emerging from the sea, inside a shell grotto and surrounded by sea creatures (although she was also associated with sea goddesses in other coastal areas). That she evokes Aphrodite without being highly feminised would have surprised a Western audience.

A modern version of Guanyin

This is a typical modern version of Guanyin as a beautiful, white-robed woman. As trade routes between Europe and China grew, merchants and Christian missionaries came to China. Chinese images came to incorporate Christian beliefs and Guanyin was shown holding a small boy, like the Madonna and Child. This figure is normally placed in a gallery next to a figure of Mary and baby Jesus, highlighting similarities between the two women and suggesting a global exchange of ideas. Guanyin is also a protector of women and bringer of influence.

*A bodhisattva is a person on the path to Buddhahood.