Since 2017 the Museum has been part of the Benin Dialogue Group and subsequently the Digital Benin Project, a multi-lateral collaborative working group, bringing together museum directors and delegates from Austria, Germany, the Netherlands, Sweden and the United Kingdom, with representatives of the Edo State Government, the Royal Court of Benin and the National Commission for Museums and Monuments, Nigeria. Member museums are seeking to address the issues of return and restitution within their own governance structures. There are different laws that apply in different countries to the field of culture and the return of cultural objects and conversations are therefore developing at a differing pace in the various countries for initiating permanent returns.

As well as playing an active role in the Benin Dialogue Group, the Pitt Rivers Museum is committed to transparency about our collections. Supporting the curatorial research that seeks proactively to expand and share our knowledge of the Benin collections currently held by Oxford University forms an important part of that commitment. Doing this research, pro-actively putting it in the public domain and consulting on improving and adding to it while in dialogue about returns is the necessary first step for a museum that doesn't just have a single item but has complex collections.

The Museum recognises the looted status of this material in the collections and is committed to ongoing dialogues with the Royal Court of Benin, relevant communities and activists to discuss the future of these objects and their interpretation.

While much of the Pitt Rivers Museum’s collection reflects the many and varied encounters between peoples of different cultures in the nineteenth century, the way in which the Benin objects were collected is one of the most explicit examples of British colonial power removing art by force from a place and nation in the interests of imperial expansion. The objects in the Benin case on the Lower Gallery were all taken from the Royal Court of the Kingdom of Benin, in Benin City, southern Nigeria, by British soldiers during a campaign of 1897 known as the Benin Punitive Expedition.

Following unsuccessful attempts at annexation, British forces sacked the Benin kingdom, burning cities, forcing the reigning king into exile, and looting works of art and other treasures. Some of these are in the Pitt Rivers Museum. These objects were made between the fifteenth and nineteenth centuries and are part of an artistic culture stretching back hundreds of years. Most of the objects in this case were made to glorify the Oba, or divine king, and to honour great kings of the past. They are made mainly of brass and ivory, both considered to be important materials by the Edo people of Benin City.

The ivory and brass armlet in the case would probably only have been worn by the Oba. It has been carved with pictures of mudfish and the heads of European traders. As the official owner of Benin lands and the final adjudicator of justice, the Oba oversaw resources including ivory and regulated trade with other African kingdoms and with European merchants, including the Portuguese and the Dutch.

The brass plaques once adorned the wooden pillars of the Oba’s palace. One of the plaques depicts the Oba seated between two attendants. On either side, above his head, are two Europeans wearing plumed helmets, once again showing the impact of Europe on the Kingdom. These objects demonstrate the technical mastery of the lost-wax casting technique by the artists of Benin. Metalworking remains an important artistic tradition in West Africa today.

NB. The Museum has received confirmation from the Oba and Royal Court of Benin that they would prefer the Bronzes to remain on display, whilst all parties continue to work together to review the future of these collections. The Museum is currently working on a new intervention and explanatory text for the display to provide updates on the progress being made.

The University of Oxford's Benin 1897 Collections: An Interim Report by Dan Hicks, November 2021

This Interim Report introduces the objects taken during the Benin Expedition of 1897 that are currently held by the University of Oxford as accessioned objects and on loan and identifies further objects which may or may not be from the 1897 Expedition. The Report also separately discusses related categories of object, including a) those taken during related military expeditions in what is today Nigeria; b) a range of other items taken from Benin City in the 20th century (including royal and religious objects of 19th-century date); and c) more recent artworks exported from Nigeria.

The Report also sets out a series of principles for provenance research into Benin 1897 material.

The University of Oxford's Benin 1897 Collections

On 7 January 2022 the Pitt Rivers Museum received a claim from the National Commission for Museums and Monuments, Nigeria for the return of all materials taken from Benin City as part of the punitive actions in 1897.

The University has acknowledged the claim and the Pitt Rivers Museum will now work to process the matter, following the procedures set out in the University Procedures for Claims for the Return of Cultural Objects.  Any updates on the claim or detail regarding probable dates for the transfer of the collections to authorities in Nigeria will be published online.

On 7 January 2022 the Pitt Rivers Museum received a claim from the National Commission for Museums and Monuments (NCMM), Nigeria for the return of 97 objects in the Pitt Rivers and Ashmolean Museum collections that were taken from Benin City by British armed forces in 1897. The claim is being processed by the University following its Procedures for Claims for the Return of Cultural Objects.

As one of several UK museums that hold significant materials taken from Benin in 1897, the Pitt Rivers Museum has been involved in long-term research and engagement projects in partnership with Nigerian stakeholders and representatives from the Royal Court of the Benin Kingdom. Since 2017 the Museum has been a member of the Benin Dialogue Group and has played a leading role in discussions on the future care of the collections. 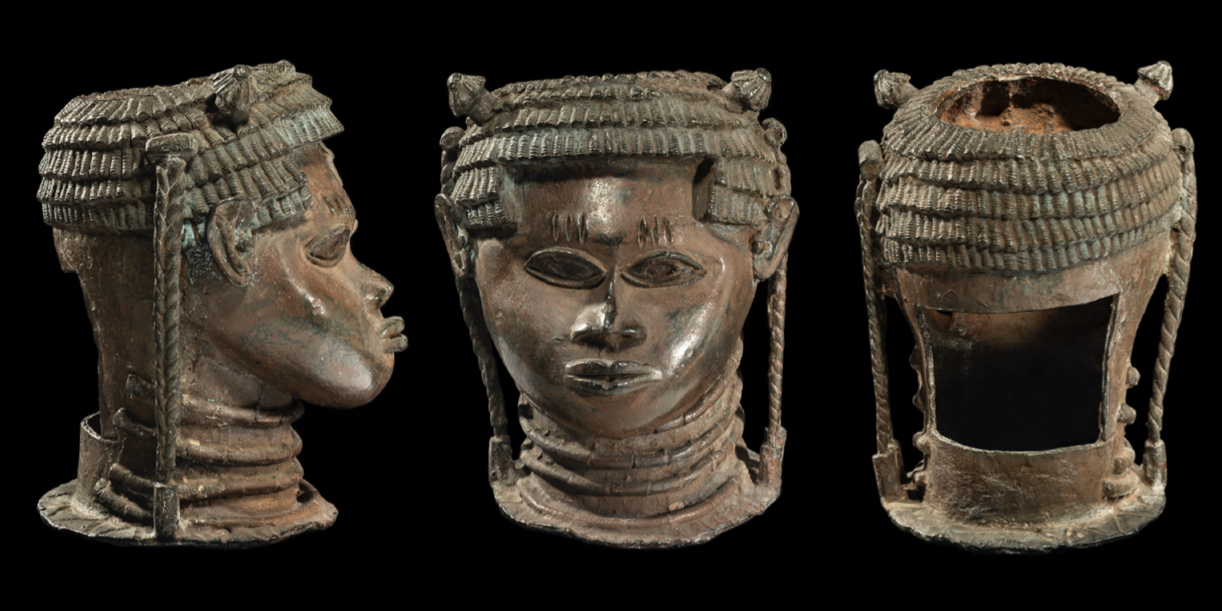 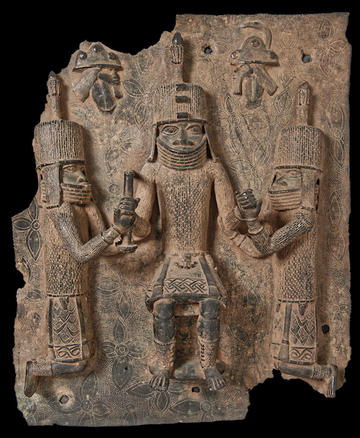 A Bronze Plaque looted from the Royal Palace of Benin, purchased by the Pitt Rivers Museum for five pounds in 1907 (accession number 1907.66.1)

Find out more about how the Pitt Rivers Museum is committed to change.