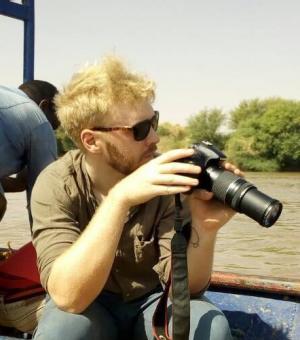 Before coming to St John’s, I undertook historical and ethnographic research in a range of locations across Kenya as a Post-Doctoral Research Fellow at the British Institute in Eastern Africa, Nairobi. I also worked as an archaeologist on the UCL Qatar Sudan Archaeological Project, excavating for three seasons at the ancient Royal City of Meroë, north-east of Khartoum.

Prior to this, I studied Egyptian Archaeology at UCL and both my master’s and DPhil at Oxford, at St Hugh’s College and The Queen’s College respectively. My DPhil research explored the recent history and contemporary livelihood practices of the pastoralist Turkana people of north west Kenya. In implementing this research, I have consulted for development organisations and projects seeking to promote economic growth and stability amongst marginalised groups in northern Kenya.

My research focuses on a range of topics concerning recent African history and contemporary life that lie at the intersection between anthropology and archaeology, including material culture, time and temporality, livelihood practices, social change, colonialism, and infrastructural and economic development. I have undertaken and been involved in research in Uganda, Tanzania, Kenya, and Sudan, but my most extensive fieldwork has been my ethnographic research in the Turkana region of northern Kenya (which I began in 2013). This research, which formed the basis of my DPhil thesis, sought to explore the changing livelihoods and systems of livelihood interaction that constitute the Turkana pastoral economy.

Building on my on-going research with communities in southern Turkana, I am currently developing a broader cross-regional and cross-cultural historical analysis of pastoralist livelihoods in eastern and northern Africa. This will involve extensive fieldwork with herding groups in northern Kenya and central Sudan, along with collections-based research at the Pitt Rivers Museum.